‘Loud’ Collingwood fan had been reported for abusive language before

The Collingwood fan who claimed he was threatened with being kicked out of the MCG on Monday for barracking too loudly says the police reaction was heavy-handed and that he "is totally against" abusive language.

But it wasn't the first time Simon Grech has been reported at a match, and his recent social media history is littered with profanities, threats of violence and aggressive phrases.

Mr Grech says he was unfairly reported by Melbourne supporters who  alerted authorities over him "cheering too loud".

When he was asked to re-create an example of his barracking on 3AW radio on Wednesday Mr Grech enthusiastically yelled, "'Let's go Woody'… and that's it". 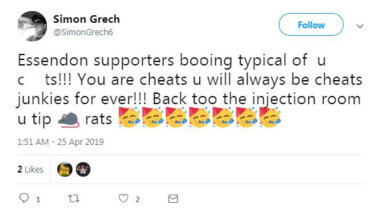 "Back to the injecting room you rats," he posted on April 25, during the Anzac Day round between Essendon and Collingwood.

He also takes aim at the French and appears to threaten violence against them. 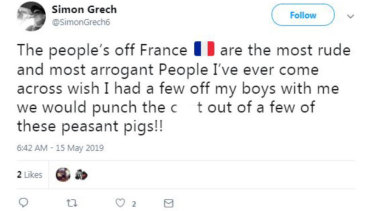 A fan has also revealed she reported Mr Grech for anti-social behaviour in July 2018 for "shouting" and "rude language".

After the game, the fan, who requested anonymity, was so concerned she sent an email to AFL membership to ensure her complaint was received.

"Someone called Simon who sat behind my friend and I … He also used the c-word and f-word. He made fun of people who turned around to show displeasure in his behaviour. He often curbed behaviour when security walked by then continued once they left," the fan said in an email to AFL membership.

The fan contacted The Age after recognising Simon Grech from a news story published on Tuesday.

This comes as the AFL issued a warning but took "no further action" against a Carlton fan who they confirmed was leaning over the umpire's race and abusing umpire Mathew Nicholls as he was leaving the ground at half time.

"The AFL’s message to everyone is clear – come to the footy, barrack as loud as you can, enjoy the game and do so in a responsible manner," the AFL said in a statement.

Simon Grech was contacted for this story and confirmed the video posted was from "last year's final". He said he did not swear on Monday, and then ended the phone call.