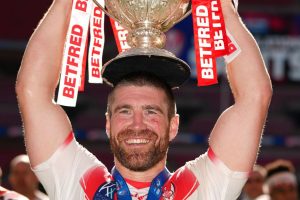 For Kyle Amor and St Helens, winning at Wembley was about much more than just lifting this year’s Challenge Cup.

It was about completing a set of domestic honours and securing a lasting legacy for a team that has dominated much of the last four seasons of rugby league.

Table-toppers in 2018 and by a record margin in 2019, Saints also lifted the title with Grand Final wins in the last two seasons. But the Challenge Cup had eluded them since all the way back in 2008, a fact Kristian Woolf’s squad could never escape.

“You’re reminded every day when you go to training and look at murals on the wall, the great players, the great teams,” Amor said. "Championships, Super Leagues, and Challenge Cups are always in there as well. This group hadn’t won one, and for us to cement ourselves as one of the greatest sides of the Super League era, we had to win.

“I know you shouldn’t really compare eras and teams, but for us we've dominated over the last couple of years. For us to win that one was massive. I’ve been here eight years now and it’s something that’s missed us time and time again.

“The final in 2019 (against Warrington) – I’ve never felt like that after a defeat in my life. I’m normally quite good at rationalising things and putting things into perspective, but that really rattled me.

“To be stood here now with this medal round my neck will live with me forever. We’ve got such a togetherness and inner belief, and it just epitomised it in that game – to be behind and come back and dictate in the second half.”

Saints could have been further behind than the 6-12 they trailed by at half-time, after Castleford tries from Lance Todd Trophy winner Niall Evalds and Jake Trueman put them in control after Theo Fages’ opener. But all four St Helens substitutes including Amor had significant impacts off the bench as Woolf’s side slowly turned the screw in a gripping contest.

It was then left to Amor to put the final seal on victory with a rousing and rare late try, adding a personal family touch to an unforgettable day. He added: “I was my son’s age 25 years ago when I watched my brother Adam play in the schools curtain raiser before Saints and Bradford, for West Cumbria against East Leeds.

“I came down and it’s one of my very first memories of rugby league. To have my mum there too – she’s now had two sons who have played at the old Wembley and new Wembley.

“Every time my brother would always wind me up about never playing at Wembley. I saw him at the end of the game with all my mates, and for them to watch me score was just awesome, I’m a lucky boy.

“They all set off on the train at seven in the morning, boozing up on the way down. To see them all there got me pretty upset, they got a picture with the cup. It’s a special time to be a St Helens player.”