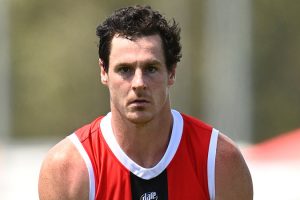 St Kilda backman Jake Carlisle is in doubt for Saturday’s date with Hawthorn after leaving training early with a back complaint.

But in better news for the Saints, Paddy Ryder, Jack Billings, Jimmy Webster and Bradley Hill have all been cleared to take on the Hawks. 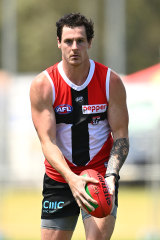 “A little bit more intensity, without the ball, with the ball, and a bit more urgency around our communication and what we’re trying to achieve. We’ve had a few weeks that we haven’t been at the level that we want to. There’s been periods of the games where we’ve played some all right footy,” Ratten said.

Ratten rejected a suggestion his team was unfit or wasn’t working hard enough, suggesting that the uncontested ball differential was more a matter of concentration.

“We were slow, and as we spoke about, the communication around the ball and behind the ball was not up to the level that we’re after. I think it’s sometimes just being switched on for longer.”

Veteran tall defender Carlisle spent an extended period on the sidelines before heading into the rooms following a drill with his fellow talls.

Ratten said after training that Carlisle would be assessed.

“He’s just got a little bit of a back spasm. He just went off. He did some marking drill with the other talls and he just came off with a bit of a spasm in his back. We’ll just assess that and see how he is,” Ratten said.

Webster (groin) trained fully and is right to go, while Ratten said Billings (foot) would confront the Hawks at Marvel Stadium despite being on limited duties.

Hill (Achilles) is also a confirmed starter while big man Ryder will play his first AFL game of the season after missing the start of the campaign for personal reasons. Ratten said Ryder would not have any load restrictions during the match.

James Frawley (hamstring) is ready to come back via the VFL this weekend, while Dan Hannebery (calf) has resumed running, according to Ratten.

Co-captain Jarryn Geary has also returned to the track as he eyes his first match of the season following a broken leg and subsequent bone spur.

“That’s somebody that we’ve missed. His energy and what he does for others, just by his presence, it brings something out in a teammate,” Ratten said of Geary.

Ratten added that young midfielder Ryan Byrnes was on the cusp of his first AFL match of the season.

“He’s pretty close. We’ve got to go in and debate that now,” Ratten said.

St Kilda must make at least one forced change this week with Daniel McKenzie out through suspension.

Hill and Zak Jones briefly barked at each other during training with Ratten saying such intensity was a positive and needed.