Luke Keary has been axed for Origin II, with Cody Walker to wear the NSW No. 6 along side Nathan Cleary.

On the same day skipper Boyd Cordner ruled himself out of the series after his latest head knock, his Roosters teammate Keary became the highest-profile casualty of the Blues' shock 18-14 defeat in game one. 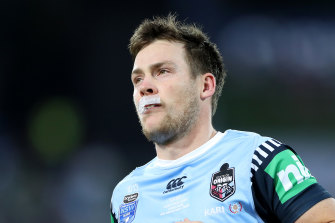 Luke Keary has been axed for game two.Credit:Getty

Plenty of fans will continue to debate the merits in sticking with Cleary ahead of Keary. Others will even argue Jack Wighton deserves to come into the halves conversation.

Johns told Andrew Webster on Thursday: “The more thought I give it, the more I’d like to see how Keary and Cody would go. More experience and Nathan’s had a long year. He’s young as a halfback at club level but in terms of Origin he’s a baby. This is the next development for Nathan as a halfback: create under pressure, under fatigue, with his team on the back foot.”