Sydney heartland regions Balmain, St George, Manly and North Sydney were among the highest growth area for rugby league participation this year, with their NRL equivalents able to source more talent than in previous years to turn their clubs around.

The NSW Rugby League is poised to announce a significant spike in the number of people playing rugby league across different formats compared to 2019 before the pandemic, underpinned by surges in their traditional city bases.

The state recorded the highest growth for men’s participation in six years, while the number of female players broke 20,000 for the first time in NSWRL’s history.

Wests Tigers have struggled to nurture a steady stream of talent through their pathways, while St George Illawarra have started blooding the top talent from their development teams such as fullback Tyrell Sloan and five-eighth Jayden Sullivan at NRL level as they bid to become a powerhouse again.

Manly’s reliance on plucking the best junior talent out of western Sydney and an association with Blacktown might not be as significant in the future given an increase in kids playing on the northern beaches.

‘The pleasing thing for the game is the increases are pretty much across the board. That’s a really strong message for the game.’

“The pleasing thing for the game is the increases are pretty much across the board. That’s a really strong message for the game. If there were local issues which were causing spikes in particular areas, you would have to work harder in other areas.”

Trodden said regional NSW – including group 3, group 9, group 10, group 18 and Western Riverina – all had an increase in junior playing numbers compared to 2019.

The figures were collated after the cut-off for registrations on June 30. 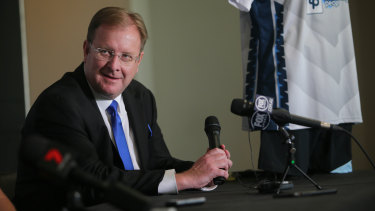 The NSWRL is set to cancel its premier competition, the Knock-On Effect Cup, as well as the Ron Massey Cup, Sydney Shield and most of the metropolitan junior competitions for the rest of the year due to the latest COVID outbreak in Sydney.

Registrations are collated across a number of formats including traditional forms of tackle, non-tackle options in league tag and Try League for Culturally and Linguistically Diverse (CALD) communities.

“I don’t think we should underestimate the growth in the women’s game, particularly against the background of discussions of general player safety issues being an impediment to participation,” Trodden said.

“The young girls starting to play the game, in the future a lot of them could be mothers and you would hope they would be motivated to let their sons and daughters play. One of the things that will cause will be inter-generational support for the game both on and off the field.”