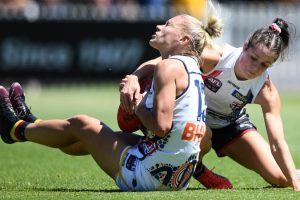 Adelaide dominated St Kilda in a comprehensive victory at Norwood Oval on Sunday but the match was complicated for spectators and viewers by a jumper clash that left the two teams almost impossible to tell apart.

Both teams were wearing special Indigenous Round jerseys that were predominantly white. Given the fluid fixture, this was not the originally scheduled Indigenous round clash for the Crows and the Saints. 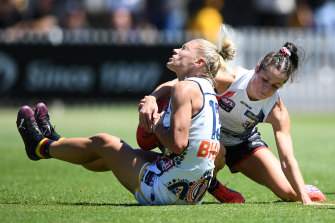 St Kilda and Adelaide directed questions about the jumper clash to the AFL, who are yet to respond to a request for comment.

The match itself was terribly one-sided.

The Saints did not have an effective possession inside 50 for almost three quarters.

To that same point, when Kate Shierlaw kicked St Kilda’s first and only goal with a few minutes left in the third term, Adelaide had generated 36 inside 50s to their opponents’ two.

The Crows could only kick one goal in the first term via an Erin Phillips set shot but after quarter-time the floodgates opened. They kicked three goals to none in the second term and two to one in the third term.

Most impressive was the way they suffocated the Saints, who are not a bad side by any means, but who have been hit by injury this season.

They blocked every channel out of St Kilda’s defence expertly, and on the rare occasion the Saints got the ball to halfway their attacks were again repelled across the half-back line.

Saints coach Peta Searle said her side were “beaten up in the one-on-one contests”.

Anne Hatchard and Ebony Marinoff were brilliant through the midfield for the Crows while the forward line duo of Phillips and Chelsea Randall were typically important, Phillips finishing with 21 disposals, five marks, three tackles and one goal.

Saints players Tilly Lucas-Rodd and Georgia Patrikios had plenty of disposals. But their forwards struggled, given the frequency they tried to get the ball out of the danger zone but were smothered by Adelaide.

Meanwhile, Geelong midfielder Olivia Purcell will miss the rest of the season after rupturing her anterior cruciate ligament in Friday night’s loss to Richmond.

Cats head of AFLW Brett Johnson said on Sunday that the club’s medical team would work with Purcell on her surgery and rehabilitation plan.

“We are so disappointed, this isn’t the news we hoped to hear. We will wrap our arms around Liv and continue to support her,” Johnson said. “We know she will tackle this challenge with strength and determination.”