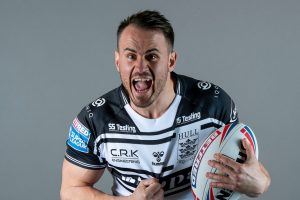 When Josh Reynolds was going through the toughest of times in Australia, one man played a huge part in helping keep his life together.

In December 2019, Reynolds hit the front pages Down Under over a domestic violence charge. The case was thrown out when the woman involved was publicly exposed as a notorious liar, exonerating Reynolds completely.

But his personal life had been the subject of the worst kind of attention for three months. At other stages during a difficult three years at Wests Tigers, Reynolds struggled to get into the team.

But at every point, the club’s assistant coach Brett Hodgson was there to support the 31-year-old. Now the pair have been reunited in the hope they can end Hull FC’s long run of underachieving in Super League, and a top flight title drought that dates back to 1983.

And Reynolds will never forget the support that new Black and Whites boss Hodgson offered him at his lowest points. “He’s my coach and I have the utmost respect for him, but I consider him my friend too,” Reynolds explained.

“He’s been there a lot for me when I was at the Tigers, going through a bad time with some off-field stuff. I had a fair bit of big stuff going on away from footy, and not a lot of people like to ask you questions when things aren’t going good.

“They don’t necessarily want to have those awkward conversations, but the relationship we have I knew he cared. I’ll never be able to repay him for that. And when I wasn’t getting picked in the team I’d be filthy, then I’d come out onto the field at training and he’d tell me a stupid joke to cheer me up.

“For him to bring me over here and finish my career on my terms, it’s a pretty special bond we’ll have. I’m very appreciative of him, and I know the boys like that you can have a normal conversation with him because he was a player and he does get the rugby league rollercoaster.”

On the field, Reynolds arrives in Super League with the reputation of a player that team-mates love – and opponents hate. His combative and often confrontational style earned him the nickname Grub from former London Broncos loose forward Jim Dymock when the pair worked together at Canterbury Bulldogs.

It was based on a rogue fictional rugby league film character, and is a label that has stuck ever since. Reynolds himself has long been at ease with it – but revealed his new Hull FC team-mates were reluctant to broach it with him when he landed in this country late last year.

“I think in the first week they were a bit nervous about whether to call it me or not,” Reynolds laughed. “Now they don’t care – they’re into me about everything, my hairline, my skinny legs and calves, you don’t get away with much over here.

“I remember when James Graham came over to the Bulldogs, everyone was picking on him putting suncream on for rainy days and all the strange things he does before games. We used to love having a crack at him and having a laugh – I think I’m that guy now with all the English boys. I don’t care – if I took it to heart, people would only say it more. When I can understand them all it’s very funny.”

Reynolds’ main focus though is what happens on the pitch – and finishing what has been an outstanding career overall, including four State of Origin appearances for New South Wales, on a high. He added: “I’ve come over here to rejuvenate my footy career and finish on my terms.”