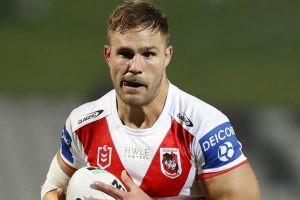 The rugby league community has blasted the “arrogant” St George Illawarra Dragons players who willingly breached the league’s biosecurity protocols in Shellharbour over the weekend.

On Monday, the NRL handed down a whopping$305,000 in fines after forward Paul Vaughan hosted a party in breach of the league’s Level 4 Biosecurity Protocols and the state government’s stay-at-home order.

NSW Police were alerted to the house party after a noise complaint from neighbours.

Some Dragons players allegedly attempted to flee the scene or hide on the premises when the police arrived.

“There’s been an attempted cover-up here by the players,” Kent said on Monday evening.

“They’ve been outed on it, but the players got to the point where when the police arrived, Jack de Belin was hiding under a bed.

“That didn’t come to light, I believe, until later. And there was an attempted cover-up there to try and hide Jack.”

The Daily Telegraph’s Phil Rothfield added: “I’d heard that a couple of players hid in cupboards.”

Channel 9’s Danny Weidler reported that de Belkin told the club he was “walking his dog” in the vicinity of the party.

AAP reporter Scott Bailey tweeted: “There are people in this city who haven’t been able to see loved ones’ last days because of this lockdown. A BBQ is not a good enough excuse.”

Sensible punishment from the NRL re Dragons players. Staggering the suspensions is out of the box thinking, but so is the situation.

My gut feeling is Paul Vaughan has played his last game for @NRL_Dragons. There was speculation around his future prior to latest issue. Hearing sanctions not far away. Expecting mass suspensions and fines. @aus_sport

I’ve followed @NRL_Dragons all my life but, wow, they’ve been tough to love the last few years.

Shopping in the bargain bin for players booted from other clubs. Chasing Hayne & Folau when they were beyond radioactive. Now this.

Last year, Vaughan was stood down for two weeks after visiting a cafe while biosecurity bubble regulations were being enforced.

The 30-year-old has this week copped a monster $50,000 fine – the maximum financial penalty that can be handed down by the NRL to a player – and an eight-week suspension for his latest Covid breach.

“Paul Vaughan’s clinging on by the skin of his teeth,” Fox Sports reporter James Hooper said on Monday.

“There’s no question whatsoever tearing up his contract is going to be discussed.”

NRL 360 presenter Yvonne Sampson said: “Given his track record now, with two severe breaches in the biosecurity (protocols), it’s likely that he could’ve played his last game for the Dragons.

Meanwhile, de Belin copped heavy criticism from the NRL 360 panel for deliberately threatening the competition’s safety just four weeks after returning to the sport after a lengthy absence.

Kent replied: “He’s four games back into a career that he’d been two-and-a-half years out of.

Has Paul Vaughan played his last game for the Dragons?Source:Getty Images

Rothfield bluntly said: “Their culture stinks. When you put de Belin in with Vaughan and you throw Corey Norman into the mix – the three of them there is bad, bad news for St George.

“They need to do something about that.”

NRL chief executive Andrew Abdo accused the players of deliberately putting the continuity of the competition at risk.

“On the information we have, the players understood the protocols and deliberately chose to ignore them, they chose to risk the continuity of our competition. The sanctions handed down today puts every player in the game on notice, particularly repeat offenders – this sort of conduct will not be tolerated.

“There are many people working incredibly hard to keep the competition going – it’s a privilege to play football, not a right. We’ve made promises to the community and to state governments and we will do everything we can to honour those promises. I want to stress that there are almost 900 players and officials following strict biosecurity measures and the overwhelming number are doing the right thing, as they did last year.

“We will continue to work with all clubs and state governments to ensure compliance, the health and safety of the community, our players and officials the continuity of the competition.”

Dragons chief executive Ryan Webb blasted the 13 guilty players for their “arrogance and ignorance”, describing the situation as “upsetting and infuriating”.

“All 13 players have let the rest of their teammates, the entirety of our hardworking staff, their families, the wider community and most importantly our Red V members, partners and fans, down,” Webb said in a statement.

“The entire club and our stakeholders will now be punished as a result of the combined 20-week suspension procured between the 13 players.

“The Dragons hold no reservations over the punishments handed down by the NRL Integrity Unit or NSW Police given the players‘ complete disregard for both the game and community’s expectations.”

The Dragons are scheduled for a bye in Round 17 – they will next face the Manly Warringah Sea Eagles at Brookvale Oval on Friday, July 16.

The NRL’s fines for the Dragons’ Covid-19 breaches are: