Former Melbourne president and colourful businessman Joseph Gutnick says he has long forgotten and forgiven those involved in his acrimonious departure from the club and is “deliriously happy” about the Demons’ first grand final appearance in 21 years.

It is 25 years to the week since the respective membership bases of Melbourne and Hawthorn voted on whether to merge. Don Scott famously led the Hawk resistance, and the course of football history was altered. 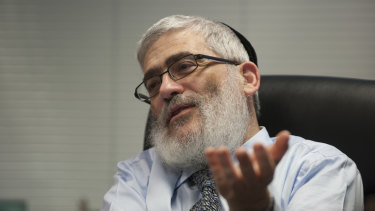 But from the bitter Demon wreckage came the most unlikely of leaders in the form of the devout, red and blue yarmulke-clad Gutnick.

The diamond magnate would lead the Dees as president for five years before departing in 2001, initially resigning mid-season following board divisions, and then losing an election to Gabriel Szondy at the end of that year.

He hasn’t bobbed his head up much at Melbourne since, dealing with his own issues including the declaration of bankruptcy in 2016 and the winding up last year of his mining company Merlin Diamonds Limited following an Australian Securities and Investments Commission investigation. 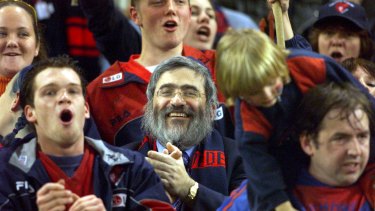 Gutnick is not keen to revisit these matters.

But he maintains he has kept his eye on the team’s fortunes.

“I’ve been low-key, I haven’t appeared much in public. I haven’t been in the papers much, I’ve had my own issues, which are behind me hopefully,” Gutnick told The Age this week.

Ironically, Melbourne’s first grand final outside of Victoria will be the first Demons grand final Gutnick gets to watch live.

Though, not live in person. Gutnick, 69, these days lives in Tasmania and won’t be heading to Perth for the match on September 25.

But for once, Gutnick will at least be able to watch in real-time on television. The ordained rabbi’s strict adherence to Orthodox Judaism means he has never watched TV or attended the football during daylight hours on Saturday, the Sabbath.

A night grand final though, is another matter. So Gutnick, a six-decade supporter of the club, is very excited. 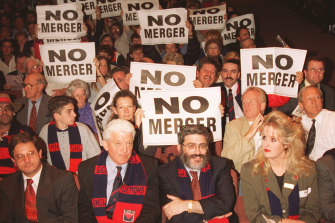 Melbourne supporters at an anti-merger meeting at Dallas Brooks Hall – Brian Dixon and Joseph Gutnick (right) are pictured at the front.Credit:Vince Caliguiri

“When I came from Sydney in the early ’50s, it was Melbourne’s glory days. And of course when you come to a city as a young kid, you barrack for the best team, and that’s what Melbourne was. And if anyone knows me in life I’m very loyal.

“I’m deliriously happy. I’ve been a member for 25 years. I had a good feeling about this year. I’m over-excited and over-nervous.”

In Gutnick’s time at the helm the club would make the 2000 grand final, a match Gutnick did not attend because it was on a Saturday afternoon.

He befriended players from that era, including now-Dees director Brad Green. Gutnick said he had been in regular contact with Green and had been keen to attend a club function this year, but the pandemic made it too hard.

“I wanted to come to show my support…I’ve been trying all year, it just didn’t work out,” Gutnick said.

“I bear absolutely no grudge to anybody. Five years was enough for me as president. It was a lot of stress. But I don’t regret it for a second.

Gutnick says he reached out to Neale Daniher – who he hired as coach at the end of 1997 – following Daniher’s MND diagnosis.

And he credits the late Jim Stynes for setting the club on the right track.

“Jim Stynes did a lot for the club to get them out of debt,” Gutnick said.

And now, like legions of Dees fans, Gutnick is enjoying his team’s success with loved ones.

“My grandchildren, my children are over-the-moon. The younger ones are all diehard Melbourne, they’re all going crazy and all over-excited.

“I’m confident they will [win] because they are so driven, and such a united group.

“It’s just a fantastic team and they work as one.

“We’ve been in the wilderness for such a long time, and I just get a good feeling.”

Asked whether he thinks all this would have been possible if not for his contribution a quarter of a century ago, Gutnick shows humility.

“All I feel is I’m happy I was part of keeping the club together and getting them out of a dire spot at the time,” he said.