Resurgent St Kilda midfielder Luke Dunstan insists he holds no grudges against his club’s coaching staff despite admitting he felt somewhat hard done after being consistently bypassed at the selection table in the opening half of the season.

A senior regular under previous coach Alan Richardson, Dunstan had 21 disposals in a Brownlow-vote worthy performance in round one last year before being dropped for round two, then injured, and not playing another senior game all season. 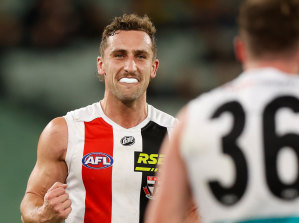 With Brad Crouch and Jack Higgins coming through the Moorabbin doors over the off-season, the South Australian again found himself on the outer at the start of this season. selected just once in the first 10 rounds.

But having been recalled for round 11 on the back of strong VFL form, Dunstan is averaging 27 disposals across his last five games and is again a central plank in the Saints’ on-ball brigade.

A free agent, Dunstan said after Sunday’s win over Collingwood that there has been no movement yet on a fresh deal with St Kilda.

The first-round draft pick from 2013 was adamant that he never lost belief in his ability.

“Personally I don’t think I’ve really changed anything. For me it was just about getting the opportunity,” Dunstan said.

“We obviously traded a couple more guys in this year. I knew that would be the case that I had to sort of bide my time and wait for an opportunity. I guess I was just lucky enough that the boys weren’t playing well enough, that were in the side.

“It would have been easy to give up given the circumstances, but it’s not the person I am.”

“Probably every player thinks they’re hard done by if they’re not getting picked. It’s just the way things go at footy clubs. People get opinions about players and it’s hard to change that until you’re given the opportunity in the senior side. 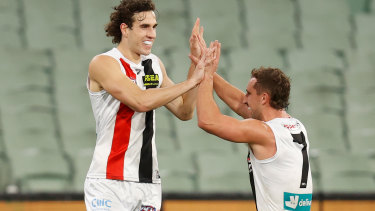 Dunstan praised Sandringham coach Jake Batchelor for backing him in at the start of the year, allowing Dunstan to thrive despite his limitations.

“It’s obviously been pretty well documented about my kicking [struggles]. I’ve just had to work through that mentally and try to manage that the best I can,” Dunstan said.

“I’m 26 now. When you’re younger you’re hung up on footy being the be-all and end-all and how you go on the weekend dictates your whole week. But I’ve probably just relaxed a little bit.”

Dunstan also elaborated on mid-season meetings that appear to have helped turn the Saints’ season around, leaving them knocking on the door of the top eight.

“The whole group’s got a lot pointier … making sure we’re out there working on the things we need to work on after training.

“We were a bit unclear on what we were valuing and whether or not they were the right KPIs. We’ve stripped things right back now and just have two simple focuses.

“[They are] our competitiveness and how much we want to compete and doing the team-first things as well that bring other people into the game.”