Home » Rugby League » ‘It would have gassed him’: Freddy defends Papenhuyzen non-inclusion

‘It would have gassed him’: Freddy defends Papenhuyzen non-inclusion

Ryan Papenhuyzen likes to think he would have made a difference against Queensland playing fullback for the injured James Tedesco the final hour at Suncorp Stadium.

Papenhuyzen's omission was impossible to ignore once Tedesco was knocked out on Wednesday night and coach Brad Fittler had four forwards – not a specialist back – on his bench. 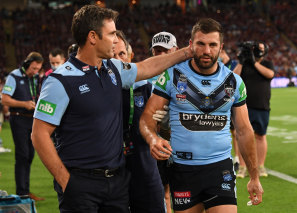 Brad Fittler consoles James Tedesco as he comes from the field with concussion.Credit:Getty Images

"To put him in at lock forward, it's hilarious. It would have gassed him. He would have been there for five minutes. He's a good fella, Paps, everyone enjoyed his company and he's a good dude. Everyone can see why there's excitement around him.

"To not take in the team that played so well in game two would have been a brave call. And at the end of the day Cameron Munster was the difference. He was pretty outstanding.''

Clint Gutherson moved to fullback and Isaah Yeo slotted into the centres as Papenhuyzen sat high up in the coach's box watching his new mates get rolled by a few of his Melbourne club mates.

Papenhuyzen, who exited Sydney's Sofitel Hotel on Thursday morning to begin his first day of freedom after 210 long days inside a biosecurity bubble, told the Herald he would not have been overawed if catapulted into the hostile Suncorp arena so early in a decider – and in such an important position. 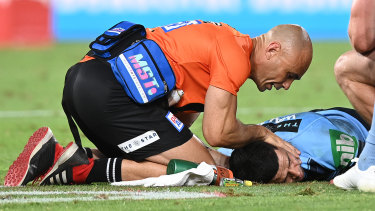 Blues doctor Nathan Gibbs said Cody Walker was recovering well after being knocked out in the closing stages.Credit:Getty Images

When asked if he could have made a difference, Papenhuyzen said: "I think I could have. I backed the decision Freddy made to keep the same side, he has to make those tough decisions, and he's the one whose name is dragged through the mud [if he gets it wrong].

"You never know, I could have been on the bench and then we had two rucks go down. But I love Suncorp. I would have enjoyed the challenge. It's easy to say in hindsight.''

Meanwhile, NSW doctor Nathan Gibbs said Tedesco and Cody Walker were both knocked out but recovered well enough to board the late flight home to Sydney.

Walker was worse off than Tedesco late on Wednesday, but both will benefit with rest. Tedesco spoke about having a sore head and neck as he returned home. Walker was one of the first players to depart before 7am.

"They were both unconscious – they had a loss-of-consciousness concussion – which is obviously a more severe episode,'' Gibbs said. "They both recovered well and came home with the team and were on the field with the team after the game. They were both pretty good this morning.

"Normally within three or four hours you get a good idea idea if players deteriorate or improve, but they were OK.''