Home » Rugby League » ‘It sounds so basic’: How Tom Trbojevic is keeping his hamstrings healthy

‘It sounds so basic’: How Tom Trbojevic is keeping his hamstrings healthy

At some stage this week in sunny Kingscliff, Tom Trbojevic will trudge to the sideline during a NSW Origin training and complete a series of high-intensity sprint drills.

Every week Trbojevic is required to complete around half a dozen sprints at more than 90 per cent intensity. 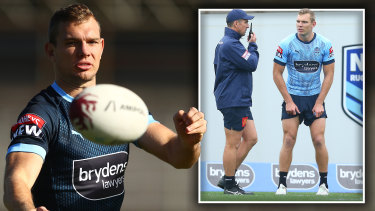 Tom Trbojevic has undergone strict high-intensity sprint training every week since his return from a hamstring injury in round six.Credit:Getty, Getty

If Trbojevic fails to reach a certain number of high-intensity bursts during a weekend game, which was the case on the Gold Coast, he must make up the sprint work at training during the week.

Nathan Gibbs, the respected Manly and Blues doctor, could not believe the results from the program put in place by Opar.

“David and his team in Melbourne have a lot of experience with hammy tears, and apart from strength work, they know the best strengthening work for high-speed running is in fact high-speed running,” Gibbs said.

“I know that sounds so basic. But this high-intensity sprint training is what has really turned him around. We’ve introduced it since the Corso incident, which was well publicised, and [Manly physio] James Rahme has really got it up and running. The best thing is this program has not only got Tommy back playing and free of injury, it’s also got him playing bloody well.” 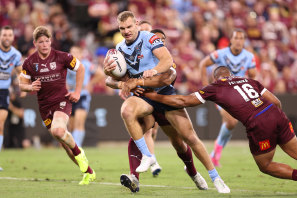 Out of the way … Turbo in full flight in Townsville during Origin I.Credit:Getty Images

He was restricted to light duties on Tuesday, and will up his program on Thursday.

“This has been such an important program, I know it’s controversial and sports scientists believe the best way to hurt your hammy is high-speed running, but it’s been a balancing act with Tommy, and so far so good,” Gibbs said.

Trbojevic told the Herald on Tuesday there had not been a single scare with his hamstrings since his off-season injury and the sprinting was completed in a controlled environment.

“Ruben basically helps me with my routines before a game,” Trbojevic said. “We’ve done it all year, just working on my warm-up exercises and stretches. It’s all about getting me activated.

“I’ll also do plenty of breathing. It calms me down. I still get very nervous before a game, I always do, especially the big ones.”

Trbojevic was unstoppable in Townsville during Origin I, and a few eagle-eyed fans spotted Maroons five-eighth Cameron Munster go out of his way to grab Trbojevic’s leg and twist his hamstring backwards in a tackle.

Trbojevic smiled and said: “There was nothing in it. Cam was just giving me a bit of a stretch.”