‘It doesn’t mean you don’t do the work’: AFL sees upside in Collingwood’s cultural review

Collingwood’s cultural review into Heritier Lumumba’s accusations of racism may not heal his relationship with the club, but like the footy industry’s reckoning with the Adam Goodes saga – despite his continued distance from the game – it will still prove transformative. 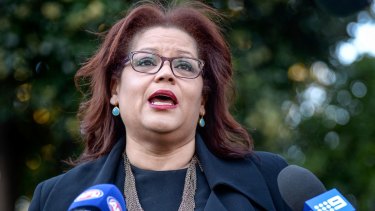 That's according to Tanya Hosch – the AFL’s head of inclusion and social policy and an Indigenous Australian herself – who also said she was disappointed the AFL can’t use the Aboriginal flag on the ground for Sir Doug Nicholls Round because of a copyright dispute, and that the recent vaccination mistakes with Aboriginal players going into Queensland hubs was a breakdown of process.

Lumumba has repeatedly lashed the Pies' handling of his racism allegations and that has not changed since Collingwood appointed Indigenous professor Larissa Behrendt to lead their review of the complaints.

When asked about Collingwood's review, Hosch compared it to how the 2019 documentaries about racism toward Goodes (The Final Quarter and The Australian Dream) gifted the AFL industry a chance to learn from past mistakes, even while the player's relationship with the code remained strained.

She also acknowledged it was difficult for people to speak up about racism in workplaces when it happens for fear of it setting them back or being further ostracised. 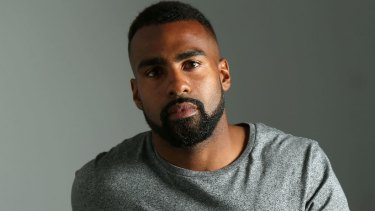 Lumumba remains critical of the Magpies, despite the launch of a review into his claims. Credit:Pat Scala

“What’s really important is we do learn from our history. To go back and reflect on where we got something wrong should not be feared, it is an opportunity to learn so we should embrace those opportunities and I believe that is what Collingwood is trying to do here," Hosch told The Age.

“That’s what we did last year … That opportunity was a gift to us. I feel like we did learn a lot from re-visiting what Adam went through.

“Understanding the perspective of the person who has been vilified is a really, really important start.

“One of the big learnings for me from last year with the work around the films is that we may not be able to fix what someone went through from the past. But the work you need to do to make sure you don’t repeat those mistakes – that is your work to do.

“Even if you can’t achieve a mediated resolution where everybody gets back into a trusted, reciprocal and respectful relationship it doesn’t mean you don’t do the work.

“If the only goal is to try and be friends again then you’re missing a lot of opportunities that prevent you from making the same mistakes in the future.

“Obviously getting to a resolution is highly desirable but it is Heritier’s choice about how he feels about those efforts. But it doesn’t mean that any of us shouldn’t be making any of those efforts.”

Hosch said the AFL was advised by their Aboriginal and Torres Strait Islander council to avoid an agreement with WAM Clothing to use the Aboriginal flag in this week’s Sir Doug Nicholls Indigenous round.

“It is disappointing but we know the position we have taken is in line with the sentiment of Aboriginal people across the country,” she said.

She also said the AFL had answered questions from the players' association into how Aboriginal players were wrongly told they had to have a pneumococcal vaccine when entering Queensland hubs, and that results of a review would soon be released.

“I am not sure that [a misunderstanding] is how I would put it. But what I would say is that there was clearly a breakdown in process and you need to review these things quickly … [and] tighten these things up to prevent it from happening again.”