Inglis: Don’t compare Mitchell to me

Greg Inglis doesn’t like the comparisons. The way he was likened to Mal Meninga or young gun Joseph Joseph Suaalii to Latrell Mitchell or Mitchell to him.

“It’s exactly what people are saying about Latrell,” Inglis told the Herald. “Latrell is his own player and wants to be his own player, which is great. 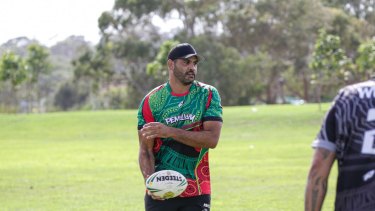 Greg Inglis was one of the star attractions in the Bennelong Cup touch football tournament.

Inglis may have retired, but he was back on the footy field for the Bennelong Cup on Friday. The champion fullback joined league luminaries including Preston Cambell, Willie Mason, Geoff Toovey, Cliff Lyons, Jeremy Latimore and George Rose as they mixed it with graduates of the NRL's School to Work and Souths Cares Nanga Mai Marri (Dream Big) programs.

Inglis continues to remain involved with South Sydney, where he helps coach the club’s best outside backs from junior to NRL level. The role gives him a chance to mentor teenage sensation Suaalii, who is considered one of the best juniors in the game.

The 16-year-old isn’t eligible to play first grade until his 18th birthday ticks over next August, but already he is being wooed by both rugby codes. Wallabies coach Dave Rennie recently met with him, while Samoan league coach Matt Parish said he is on his radar if he could prise him out of the NSW Blues system.

“Joseph is a great kid,” Inglis said. “Yes, he’s very talented, he’s a terrific kid and his family is as well. With what he’s parents have done with him growing up – and he’s still growing up, he’s only 16 – it’s good. He’s got a good head on his shoulders and he’s a very intelligent boy.

“(Coaching youngsters) is most enjoyable. Our biggest goal as junior coaches is to make them better players and better people. They’ve got a lot of work during the day with school and then coming to training from 5:30pm to about 7-7:30pm. It’s a big commitment and it’s good to see them enjoying it.”

Inglis is also enjoying life after football. The former Maroons star still plays in a local competition in his hometown of Macksville in between his obligations with the Rabbitohs.

“It’s good being back at the club, doing from the 16s up to first grade,” he said. “I’m enjoying it, loving it. I’m working with Ben Hornby and Jason Demetriou and Wayne Bennett. It’s a good crop of leaders and coaches to learn off.

“I was lucky with all the coaches I’ve had throughout my career. To keep on working with Wayne makes my job enjoyable.”

Mitchell skipped the Nines but could wear the cardinal and myrtle for the first time in next Saturday’s trial match against Parramatta at Wentworthville. It could also mark the first chance to witness Cameron Murray shift from lock to an edge-backrow role, an intriguing change given he won a Dally M positional award in the No.13 jersey last year.