Tough St George Illawarra skipper Ben Hunt has rated the pain of playing with a broken arm worse than the broken leg he suffered during a game earlier this year.

“This was more painful, especially after the game, it cranked up a bit and was probably like an ‘eight out of 10’,” Hunt told the Herald on Tuesday.

“It was more annoying than anything because I couldn’t grab anything with my hand – I couldn’t make a fist and grab onto stuff, which made it hard to tackle and even pass the ball.

“I thought it may have only been bone bruising. I had bone bruising in my left arm a few years ago, it was really painful after I got a smack on it, and that was probably why I stayed on the field the other night.

“I’ve always had a high pain threshold. Part of me just doesn’t want to let the team down.

“I’m a competitor, and if I feel like I can stay out there and keep going, I’ll do that. 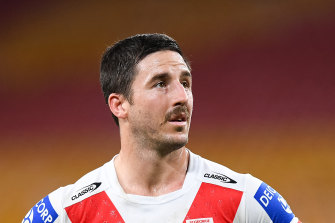 “I ended up suffering a couple of hairline fractures in the radius bone. I’ll see the specialist again in a couple of weeks to see how it’s healing.”

Hunt proved once again why he is one of the toughest and bravest players in the NRL after he played 27 minutes with a broken right arm against South Sydney on Sunday night. 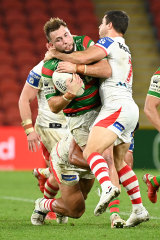 The Dragons halfback makes a tackle on Sunday night.Credit:Getty Images

Replays showed him reel out of a tackle on former Dragons teammate Jacob Host, only to pop up a minute later and shove Queensland Origin teammate Dane Gagai into touch.

He did likewise against Manly back in round three when he stayed on the field for 71 minutes with a broken leg, which he rated a “seven out of 10” on the pain scale.

This time last week Hunt was excited to return home and play in front of family and friends in Rockhampton, only for that game to be scrapped at the last minute because of Queensland’s latest COVID-19 lockdown.

Then he broke his arm.

Hunt is determined to return in four weeks time for the round 24 and 25 games against North Queensland and Souths again, regardless of whether the Red V are still in the finals hunt.

They can keep the September dream alive with a win over Canberra on Friday evening.

The 31-year-old halfback loves the club and wants to do everything he can for them, even though they have fallen well short again of the high standards set by the Dragons’ faithful.

Hunt added the fallout from Paul Vaughan’s barbecue, including the one-match bans for the 11 other players who attended the sacked prop’s Shellharbour shindig, had hurt the club at the worst time of year.

“It’s not an excuse but it has hurt us having those blokes out, and it’s disrupted this part of the season,” Hunt said.

“It’s made it tough on the club. Josh Kerr and Gerard Beale are out this week and then it’s all done. We have to put it behind us and get on with it.

“If we’re out of finals contention we’ll assess [my return] then, but even if we are I want to come back and help the boys out.”

Junior Amone and Jayden Sullivan are two 19-year-old playmakers in the race to wear the No. 6 next season, and both have bright futures, according to Hunt.

As for the Dragons’ roster moving forward, Hunt said the club has two smart recruits in Jaydn Su’A, the Queensland Origin representative he believes can “be a back-rower at the Dragons for the next 10 years”, and North Queensland prop Frank Molo who “has great leg speed and is tough”.

Never miss a medal or great sporting moment with our Olympic update emailed daily. Sign up for our Sport newsletter here.