Home » ‘Hopefully he gets a cold’: Ross an option as Saints consider how to stop Martin

St Kilda coach Brett Ratten has left the door ajar for the Saints to apply a hard tag to Richmond superstar Dustin Martin in Thursday night’s date with the Tigers at Marvel Stadium.

Ratten joked that the best way to stop the Brownlow Medallist was for him to get a cold, before suggesting more seriously that St Kilda could employ a lockdown player to curb the Richmond great’s influence. 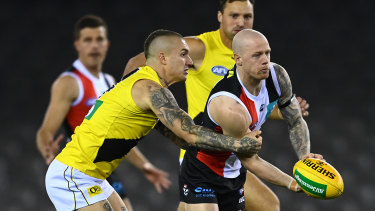 Martin has started the season outstandingly, notching 13 score assists through four rounds. No AFL player had recorded more through the opening four rounds of a season since Chance Bateman’s 14 in 2009.

Martin was dominant in Richmond’s semi-final win over the Saints last October, notching 25 disposals, 10 clearances and a goal. Rattten hinted that dual best and fairest Seb Ross could be the man sent to Martin.

“Hopefully he gets a cold,” Ratten said jokingly of Martin.

“He’s a great player. You’re not going to stop the great players getting the ball but you can stop their influence sometimes.

Asked about the prospect of a hard tag, Ratten said: “There might be.” 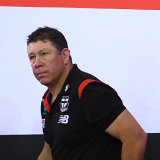 Of Ross, Ratten said: “He’s one that’s done it before.”

In positive news for St Kilda, ruckman Rowan Marshall and midfielder Zak Jones are both on track to face the Tigers.

Marshall had been under an injury cloud with a foot issue, while the Saints are looking to be conservative with the injury-prone Jones given they are coming off a five-day break.

But as it stood after training at Moorabbin on Wednesday, both Marshall and Jones were likely to play, according to Ratten.

“He’s doing everything right, so unless something pops up he’ll play.”

Reserve ruckman Paul Hunter trained with the main group and is on standby for Marshall.

As for Jones, Ratten confirmed the Saints had been contemplating resting the former Swan.

Luke Dunstan and Ben Long both trained with the main group and could play if Jones isn’t risked.

Defender Darragh Joyce also trained, suggesting he is likely to be an emergency.

Veteran big man Paddy Ryder is progressing well but won’t yet be risked this week – even in the VFL – following his recent stint away from the club. But Ryder could play in the AFL as soon as round six.

“He was probably best-on yesterday at training,” Ratten said.

“But we’ll just stick to the process and his program. He won’t be far off against Port [in round six] or we wait for the Hawthorn week [round seven]. But he’s going really well.”

James Frawley (hamstring) is at least another week away from returning via the VFL.

Meanwhile, at Punt Road on Wednesday, fringe big men Mabior Chol and Callum Coleman-Jones both took part in the Tigers’ captain’s run, indicating both are in the selection frame for the AFL.