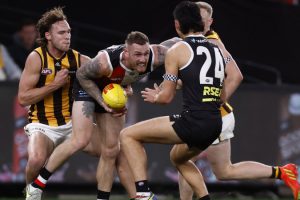 St Kilda remain firmly in the finals race after disposing of a fast-finishing Hawthorn on Saturday but the Saints are now bracing for a defining three weeks to end the home-and-away season.

The Saints, who began the weekend in ninth spot, took care of business in posting a 12-point victory at Marvel Stadium on Saturday, their 11th win of the season ensuring they are firmly in the hunt for September.

However, their run home could not be any harder, for they face premiership contenders Geelong (GMHBA Stadium), Brisbane (Marvel) and Sydney (Marvel). At this point, they are jockeying with the Western Bulldogs and Richmond for eighth spot, so at least two more wins are likely required. 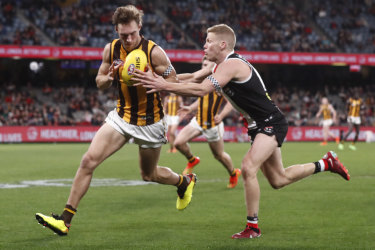 Dan Hannebery (right), in his first senior match in almost a year, was in excellent touch against Hawthorn on Saturday.Credit:Getty Images

The Saints led by 34 points at the final break and appeared set for a big win but the Hawks, led by a revitalised Dylan Moore, closed the margin to two goals with five minutes remaining. However, they were able to hold on in a tense finish.

Missing playmaker Jade Gresham, out for the rest of the season, and an injured Jack Billings, the Saints were led by skipper Jack Steele, who backed up after 40 disposals against West Coast with 31 touches and five clearances, while Brad Crouch (30 and nine clearances) was also prolific on a day the Saints dominated contested possession and clearances.

Dan Hannebery, in his first senior game in almost a year because of soft-tissue injuries, had 27 disposals and five clearances and showed he still belongs at the top level. He had regular stints on the bench but, when on, his ball use was good. 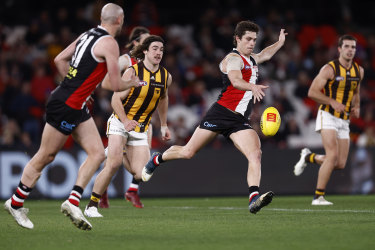 St Kilda skipper Jack Steele, backing up after a huge afternoon against West Coast, was again influential, this time against the Hawks.Credit:Getty Images

“Those last 10 minutes I was cramping … it’s been a hell of a journey the last few years,” Hannebery said. “Certainly, I am very happy and grateful to play again. I was super nervous.”

Max King, who had a mild case of the goal-kicking yips, had two goals but fellow forward Tim Membrey was pivotal. Membrey pushed hard into defence to be a bail-out option (and was used late as the spare man in defence) but was also prominent when the Saints attacked.

Ruckman Rowan Marshall, up against Ben McEvoy, was arguably best on ground. Missing side-kick Paddy Ryder, Marshall was influential at bounces and around the ground with a career-high 30 disposals, along with seven clearances and 35 hitouts, helping his side to back-to-back wins for the first time since round 11.

The Hawks had enjoyed three-straight wins, although these had been against the bottom-three teams. On this occasion, they were unable to generate their typical run from half-back, and had only one goal to half-time. This was a reality check in terms of how much work they still have to do.

Irishman Conor Nash had 11 first-term disposals and continued to find the ball, while Jai Newcombe was lively up forward. Coach Sam Mitchell made positional changes at half-time – Jack Scrimshaw was shifted forward and goaled – but it did not matter.

The Hawks weren’t helped by injuries. Josh Morris (AC joint) was subbed off at half-time, while key forward Mitch Lewis carried a knee issue after he was hurt in the first term and called it a day in the third term. Fellow tall Jacob Koschitzke played out the game with a knee issue.

The Saints dominated the second term, locking the ball inside 50 or enjoying repeated entries. But their wasteful play frustrated all. Finally, after four points, came the rewards, when Crouch tackled James Sicily on the goal-line and won a free kick. Errors abounded, but there was a highlight when Seb Ross pounced on a loose ball and converted a left-foot snap from 30 metres. It brought to life a crowd that could have been forgiven for falling asleep. The Hawks, despite Mitchell having 17 touches, were unable to play to their strengths.

Hannebery had a moment to remember in the first term when he pounced on a loose ball 25 metres from goal and converted, thanks to a favourable bounce. It was his 100th career goal, and his teammates quickly embraced him, understanding the years of frustration he had endured. It was the highlight of an uninspiring first term, with several head-shaking mistakes from both teams. Jack Gunston may have thought he was in for another big day when he was able to soccer through the Hawks’ first goal, this coming after his five in Hobart last weekend, but it quickly became a miserable afternoon.