Griffin the front-runner for Dragons job

The club has placed the former Panthers mentor atop a shortlist presented to the board as the Dragons prepare to begin formal interviews. 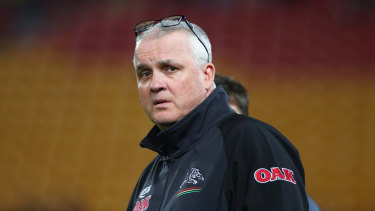 Anthony Griffin is the early favourite for the vacant Dragons job.Credit:NRL Photos

Sources close to discussions have told the Herald that one of Griffin's strongest supporters is also one of his rivals for the job. Interim Dragons coach Dean Young has provided the club with a glowing endorsement of Griffin from their time together as assistants with the Tongan national team last year. The Dragons want Young to remain as an assistant if he misses out on the top job.

Also in Griffin's favour is his experience with halves Corey Norman and Ben Hunt, who he coached as juniors at the Broncos before again taking them under his wing as Brisbane's NRL coach from 2011 to 2014.

At a board meeting last Tuesday, Dragons directors prioritised defence, discipline and a history of being involved in successful cultures as the three main criteria they are looking for when they appoint McGregor's successor in the next month.

Other names in the mix include Newcastle Knights assistant David Furner and Roosters assistant Craig Fitzgibbon. However, the Dragons are resigned to the fact that Fitzgibbon is unlikely to leave the Roosters before the end of next season such is his loyalty to chairman Nick Politis and coach Trent Robinson. 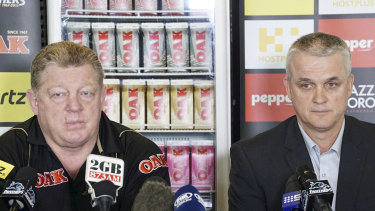 Gould and Griffin during their time together at the Panthers.Credit:Photo Supplied

If Fitzgibbon changes his mind, he will likely leapfrog Griffin to the top of the list. It's unlikely current assistant coach Shane Flanagan will remain at the Dragons if Griffin gets the job.

Griffin, who spent time at the Storm and Broncos before linking with Phil Gould and the Penrith Panthers in 2016, ticks all three boxes but has struggled to get a look-in since his acrimonious exit from the foot of the mountains on the eve of the 2018 finals series.

There's a belief at the Dragons that McGregor may have been too close to the players during his seven-year reign as coach, which could have created an environment of complacency.

Griffin is known as a strict disciplinarian and has had a high level of success in the NRL, with a 55.5 per cent win ratio from 173 games.

He was then head-hunted by Gould to replace Ivan Cleary in 2016, guiding the Panthers (58 per cent) to back-to-back finals appearances before he was shown the door on the eve of a third finals series while his team sat in fourth position.