Home » Rugby League » Gregor Paul: Silencing the doubters – why this All Blacks side is a different beast

Gregor Paul: Silencing the doubters – why this All Blacks side is a different beast 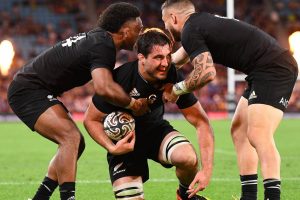 This time 12 months ago, after they suffered their first loss in history to the Pumas, there was good reason to be worried about the All Blacks. There isn’t now.

Not after the way the All Blacks, having coped with the ruck and run high speed rugby of Australia, so easily adjusted to deal with the more muscular and confrontational Pumas.

A year ago, a young, inexperienced All Blacks side were beaten up and buried by a Pumas side that got under their skin, threw them about at the breakdown and owned them in the collisions.

The story this time could hardly have been any different. The All Blacks were controlled, composed and at times brilliant.

But more importantly, they were supremely physical in all the areas they needed to be. The sense of vulnerability that was hanging around them at the end of last year is long gone after the pack produced yet another disciplined, imposing performance.

After crushing the Wallabies last week with their relentless defence, the All Blacks got the job done against Argentina with the power, agility and willingness of their close-quarter ball-carrying.

Asafo Aumua has plenty of work to do on his lineout throwing, but for 45 minutes he was quite the handful with his running.

Karl Tu’inukuafe showed that he is developing his game away from the set-piece and Akira Ioane, unable to escape and canter free as he did in Perth, still crunched a big number of impressive, hard yards.

Luke Jacobson was another who produced a big shift, but it was once again the constant presence of Brodie Retallick and Scott Barrett that was the foundation of the dominance.

Those two showed all their athleticism in the way they hit the ball so often and so hard and the ability of Barrett in particular to pick stunning angles and slip passes is what marks the All Blacks as a different beast.

It wasn’t just bash and crash from the forwards, there was real skill in the way they changed their running lines, made passes out of contact and shifted Pumas bodies.

The speed of their recycle was critical as it enabled them to play with momentum, something which is critical against the Pumas.

It’s never pretty against them – never an open or flowing contest and so the key for the All Blacks was to continue to play direct rugby where they forced Argentina to tackle themselves to a fatigued state.

The fact they were able to resist the temptation to try to open the game up and play wide was a sign of their newfound maturity.

They were prepared to wear the Pumas down rather than run them off their feet and in doing so, have dispelled the myth that they don’t have the stomach for a classic arm wrestle.

There has been an undercurrent of angst since the ill-fated match against England in Yokohama almost two years ago now – the night when the All Blacks pack were easily overpowered and didn’t mount any kind of meaningful resistance.

It was a game that inflicted deep scars – more so on those who follow the All Blacks rather than the players themselves. They were hurt by that defeat, but it wasn’t a game that destroyed the self-confidence of those who played and it certainly didn’t convince the likes of Retallick, Barrett and Nepo Laulala that they can’t handle test rugby when it turns into a war of attrition.

What this comprehensive defeat of the Pumas should do is enable some of that angst to lessen and for the doubters – those who aren’t sure whether the All Blacks have the personnel, patience and grunt to dominate the best – to see that they might have to reconsider.

The Pumas have various and obvious shortcomings, but their desire and ability to front physically and smash bodies about is not one of them.

As confrontational challenges go, they are among the toughest: big men, who love to frustrate, to use their size to slow things down and swarm around the ball.

It took control, perseverance and clinical technique by the All Blacks to dominate territory and possession the way they did and while there were a few moments of indiscretion and untidiness in the quest to build continuity and break the Pumas down, it was mostly an impressive cohesive and effective shift.

Reasons to be worried about this All Blacks side are now decidedly thin on the ground.