Gregor Paul: It’s time for Super Rugby superstar to deliver for All Blacks 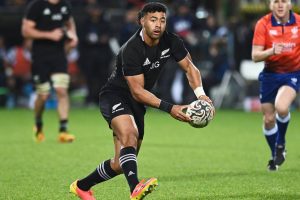 If there is a magic number in rugby, it might be 30. That’s the number of tests, supposedly, players need to play to establish themselves, or not, as international class.

After 30 tests, a player loses the ‘inexperienced’ tag and shouldn’t be making the same mistakes they were making in their earlier tests.

Bottom line, if someone is the real deal, going to cut it in test football and become a long term All Black, judgement should be reserved until they have played 30 tests. That’s the point when their performances should reach a base level and that each time they play, there are obvious signs of their game having grown and developed.

It’s proven to be a surprisingly accurate guide, with Ma’a Nonu and Conrad Smith being prime examples.

Nonu, who became New Zealand’s best second-five in history, was first capped in 2003 and played sporadically through to the next World Cup cycle – famously missing selection for the 2007 tournament.

He was up and down in those first 30 tests – a recidivist offender when it came to using the ball post linebreak and too often guilty of irrational decision-making.

It took until 2008 for him to become an All Black regular and lower his error count. By 2008 he was starting to punch big holes in defences, throw smart passes and rarely make a mistake. It was in 2008 that he played his 30th test and looked like a different player.

Likewise his long-serving midfield partner, also took about 30 tests to find himself in test rugby.

Smith was first capped in 2004, went to the World Cup in 2007 but wasn’t the first-choice centre – something that only became indisputable in 2009 when Richard Kahui was ruled out for the season.

Once Smith had played his 30th test mid-way through 2009, he never looked back and he was an automatic choice through to his last game in 2015.

What’s interesting now is to look at the current group of All Blacks and see how many are reaching or have just reached that critical 30 test landmark and ponder what we should now expect.

The most pertinent is Richie Mo’unga, who won his 30th cap against the USA and will be playing his 32nd test in Paris.

He’s been the undisputed star of Super Rugby since his breakthrough campaign in 2017, but his consistent brilliance for the Crusaders hasn’t been witnessed yet when he’s been with the All Blacks.

Mo’unga has had a handful of good tests, mostly strong cameos off the bench, but hasn’t yet delivered a compelling body of work that has established himself as a potential great All Black No 10.

The feeling with Mo’unga is that in big games he goes missing a little bit. When he came off the bench against Ireland in 2018, he was unable to get into the game, which was exactly the case last week in Dublin again. The stage was set for him to take control and yet it was all too easy to forget he was playing.

He’s played enough test rugby now for expectations to be different and that’s why the match against France carries particular significance for Mo’unga.

This is the sort of occasion made for big game players – those with the temperament and talent to feel the pressure, know what’s being asked and relish being the one to carry that burden and deliver.

Mo’unga has been the Crusaders saviour more times than anyone can remember. He’s accepted and thrived when the pressure has come on at Super Rugby and at that level, the bigger the game, the greater the pressure, the better he has played.

He’s been fearless for the Crusaders but we haven’t yet seen that same desire or ability to be the All Blacks’ guiding light in their darkest hour.

Not consistently or empathically. Not the same way he steps up for the Crusaders and if there is one specific reason why he finds himself behind in the race against Beauden Barrett to be the All Blacks No 10 it is that the veteran has the higher degree of comfort with the responsibility the job carries.

Up until now, some of that difference in comfort could be explained by their respective level of test experience.

But Mo’unga has now hit that magic 30-tests landmark and while he is inexperienced compared with the 101-test Barrett, he has played enough rugby to no longer be termed inexperienced.

If Mo’unga is going to convert his Super Rugby brilliance to the test arena, the time has come for him to start delivering. For 30 to become his magic number.