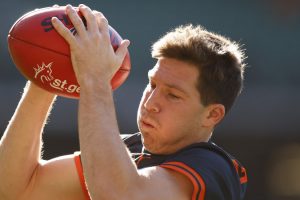 Toby Greene, Matt de Boer and Callum Mills are out of the Sydney derby after being among a group of 15 Swans and Giants players and officials caught up in the COVID-19 scare at this week’s Wallabies versus France Test match in Melbourne.

The Giants contingent of nine includes match analysts who were to sit in Leon Cameron’s coaches box and the club’s travelling media manager, while there are six from the Swans.

There were five late changes to the game with Swans Harry Cunningham and Colin O’Riordan also forced out due to health protocols. De Boer had been the Giants’ medi-sub.

Star forward Greene and gun midfielder Mills are both vital players to their sides.

Players and staff had entered AAMI Park via Gate 7 of the venue and sat in rows 25-42 of zone two which has now been reclassified as a Tier 2 exposure site by the Victorian Department of Health.

Any person in a Tier 2 exposure site is required to undergo a COVID-19 test and isolate until a negative result is returned. 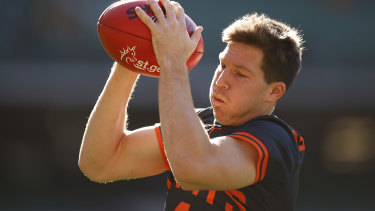 GWS star Toby Green was one of 15 Giants and Swans players ruled out of the Sydney derby.Credit:Getty Images

A source has told The Herald and The Age of the chaos at Metricon Stadium when the players and staff involved were herded into another section of the ground and sent home. The match, slated to start at 6.10 pm on Sunday, kicked off as scheduled.

Initially fixtured to be played at Giants Stadium, Derby XXI was earmarked to be held in Canberra in the wake of Sydney’s COVID outbreak only to be moved to Ballarat. Those plans were then foiled by Victoria’s battle to contain the virus.

“The AFL confirms that multiple GWS GIANTS and Sydney Swans players and club staff members who attended the Wallabies vs France Rugby match have now been re-classified as Tier 2 contacts,” the AFL said in a statement released 25 minutes before the game was due to start.

“Each of these players and staff members, currently located in Queensland and under Queensland Department of Health requirements must isolate until notified by the Department.

“None of these players or staff members will participate in today’s match at Metricon Stadium. The AFL has notified the Queensland Government and is acting in accordance with their directions.

“The Victorian Department of Health continue to contact those directly affected with further updates.

“The GWS Giants vs Sydney Swans match will proceed as scheduled – the updated teams will be released shortly.”