‘Great man, great legacy’: The other side to ferociously competitive Buckley

For a period during Nathan Buckley’s tenure as Collingwood coach, Magpies staff – including Buckley – would let off steam by playing a regular game of indoor soccer.

Buckley’s fierce desire to win was a theme of his playing career, and as he acknowledged at the press conference to announce his coaching resignation last week, he still relishes a scrap. 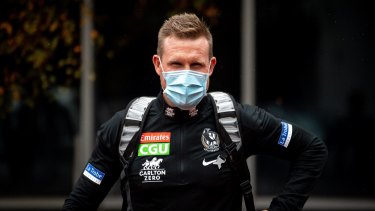 Over and out: Collingwood icon Nathan Buckley.Credit:Eddie Jim

This extended to what were, in theory, casual kick-arounds on the sprung floor of the Holden Centre.

Except, when it comes to sport, Buckley doesn’t really do ‘casual’, a point proven in 2015 when he tore his hamstring off the bone playing touch football.

Those who reflect on the indoor soccer games laugh warmly at the 48-year-old’s competitiveness. One insider said others almost hoped Buckley didn’t play, such was the intensity with which he took to the floor. There was a feeling that if you played alongside him, you were desperate not to let him down.

Another who worked at the club during that period said management just about had to ban the matches due to their overly vigorous nature and the risk of injuries.

To mark Buckley’s 218th and final game as Collingwood coach, The Age spoke to six people who worked closely with the Magpies great across his decade at the helm, ranging from players, to assistant coaches, to other football department staffers.

Speaking anonymously, they shed light on what Buckley was like behind the scenes.

MORE THAN A GAME

Overwhelmingly, the sentiment towards Buckley is positive.

Analysing his personality, and perhaps by extension his coaching stint, requires nuance.

The determined fighter is one patch of the Buckley quilt. 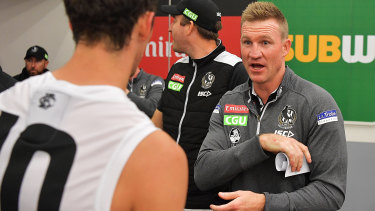 Another, however, is his empathy, probably never on public display more than in 2018, the year he famously learnt to delegate more and not sweat the small stuff quite as much.

It’s may be no coincidence that was the year in which he went closest – Dom Sheed’s nerves-of-steel close, to be precise – to winning a premiership.

Gradually he has since shifted back towards a more hands-on approach, say some familiar with how Buckley operates.

One figure central to the Pies in 2018 noted how Buckley saw the bigger picture and identified causes and issues that were more important than the game. 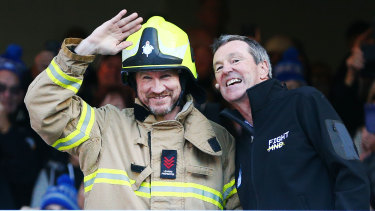 There is a touch of poignancy to Buckley’s swansong falling on the Queen’s Birthday Monday clash against the Demons, because it was on this occasion three years ago that Buckley donned the firefighting costume of motor-neurone disease sufferer and Pies fan Murray Swinton when he went down the slide into the icy water at the MCG before the game. 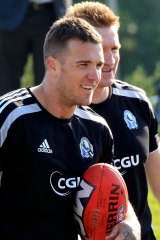 When the Pies beat the Dees to further stake their bona fides, players sung the song after the game alongside the wheelchair-confined Swinton, who died just a couple of weeks after that year’s grand final.

Buckley also brought in Nick ‘Beefy’ Burke, a Collingwood fan with cerebral palsy, to rev up the players before the preliminary final against Richmond.

Another long-time colleague lauded the way Buckley handled the deaths of former Pie John McCarthy during the 2012 finals series, and Travis Varcoe’s sister Maggie on the eve of the ’18 finals.

In 2012 he encouraged players and staff to attend McCarthy’s funeral in Sorrento the day before a preliminary final against Sydney, while in ’18 Buckley harnessed his players to rally together in the face of the Varcoe tragedy.

Having essentially taken over Malthouse’s already successful side, Buckley initiated change, forging a team in his own image as Alan Didak and Darren Jolly were delisted, Heath Shaw was traded to the Giants and Dale Thomas was allowed to walk to Carlton.

Buckley forged relationships with a new generation of Magpies. One former Collingwood figure said he expected Jeremy Howe and Brayden Maynard would be two of the players to take Buckley’s departure most heavily.

But another ex-Buckley underling said the outgoing coach also deserved credit for the way in which he struck common ground with Dane Swan, a card-carrying member of the famous “rat pack” whose influence Buckley had sought to weaken.

BUCKS TO THE WALL 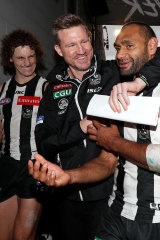 Buckley with Chris Mayne and Travis Varcoe in 2018.Credit:Getty

It is easy to forget the Magpies started their 2018 grand final year inauspiciously.

Losses to Hawthorn and Greater Western Sydney in the opening two rounds ramped up the pressure heading into round three’s date with Carlton, also winless at the time.

A source there at the time marvelled at Buckley’s ability to focus on the positives during those difficult early rounds of the season, suggesting his glass half-full approach was an important factor in how swiftly the tide turned.

As had been the case during predecessor Mick Malthouse’s days, Buckley became adept at stepping up when the Pies had their backs against the wall.

After the dramatic player turnover at the end of 2013, a long year beckoned when they were badly beaten by Fremantle in the 2014 season-opener.

They were rank outsiders heading to Sydney eight days later to take on Lance Franklin and the Swans. But as pointed out by a football department figure at the time, Buckley did brilliantly to restore his players’ belief quickly enough that they toppled Sydney, with fourth-gamer Jack Frost blanketing Franklin.

And having lost an agonisingly-close grand final, Buckley managed not to let it get the better of his team, reviewing the game but then ensuring that the Pies moved on ahead of the following season.

While 2019 had its challenges, Collingwood were a kick away from another grand final.

GOOD FOR A LAUGH

An almost-universal theme is that, when not immersed in football matters, Buckley is very good company.

“The one thing that probably is missed in his personality is the fact that he is a pretty bubbly sort of guy behind the scenes,” said one former colleague. 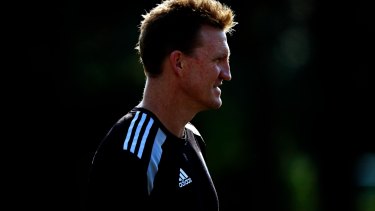 “He likes a beer, he likes a joke, he likes a casual chat based around humour. I don’t think that side of him comes out too much in the press.

Buckley, whose own personal life has been well-documented, was also said to be personable with the families of professional colleagues.

Buckley leaves Collingwood neither a premiership coach nor premiership player, but as someone in the thick of things on grand final day 2018 noted, there is much more to it than that.

“Not a single bad word to say about Bucks,” the source said, highlighting Buckley’s selflessness.