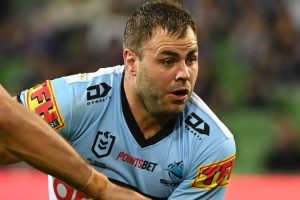 Wade Graham’s immediate playing future is under a huge cloud after Cronulla’s inspirational captain was taken from the field for a head injury assessment in his first game back after multiple concussions already this season.

On a night when the Sharks’ season went from bad to worse with a thumping defeat at the hands of old rivals Melbourne, a frustrated Graham was escorted from the field late in the match after a nasty head clash with Storm man mountain Tui Kamikamica. 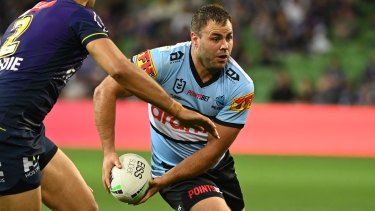 Wade Graham was impressive for the Sharks before suffering his third head knock of the season.Credit:NRL Photos

Just three weeks after Cronulla sacked coach John Morris, the Sharks turned in their worst display of the season and were powerless to stop a rampant Melbourne, led by Reimis Smith’s hat-trick.

But it was hardly the type of finish anyone would have predicted as the Sharks still led seven minutes into the second half.

Much like the season itself, the Sharks are the NRL’s great anomaly. Heading into the round, the ladder said only the Tigers, Broncos and Bulldogs were going worse. They’d won only two of seven games, but still had a positive points differential.

If someone wanted to argue the Sharks could almost be unbeaten this season, you could almost fathom why. They blew late leads against the Roosters and Knights, had several handfuls of tries disallowed against the Bulldogs, couldn’t kick goals to beat the Raiders and played with no one on the bench against the Eels – a match which prompted the NRL into bringing in the 18th man rule. 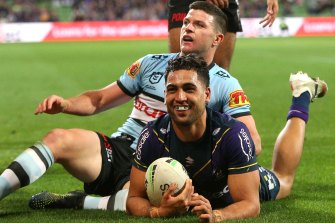 Reimis Smith celebrates one of his three tries on Friday night.Credit:NRL Photos

But the only currency which matters, wins, is the one they keep letting slip through their fingers.

Josh Hannay needed seven games to win his first as caretaker coach of the Cowboys after they sacked Paul Green. At this rate he might be doing well to beat that record with the Sharks.

Cronulla led by two points at half-time, and it should have been more. Melbourne’s only try was an 80-metre runaway effort from Josh Addo-Carr, who only got the ball because Shaun Johnson dropped it as the Sharks peppered the line of their rivals.

But the response, and that of Johnson, was swift.

Where the New Zealand international ends up next year nobody knows. He could stay at the Sharks potentially alongside Adam Reynolds, he could be at the Broncos, he’s even been offered back to the Warriors. But if he keeps throwing deft passes like the one which sent Briton Nikora scything through untouched, he will find a home.

And that’s exactly where the Storm are most comfortable.

No club does milestones better, and they would have known this win was their 100th at AAMI Park.

Once Chad Townsend threw an intercept allowing Jahrome Hughes to scorch downfield before Tom Eisenhuth’s try, there was only going to be one winner. Harry Grant shook off a dislocated finger to set up a couple of tries in his first start of the season and a couple of Smiths, not of the Cameron variety, shone with Reimis and Brandon diving over.

Cameron Munster, hilariously, even managed to miss a conversion attempt from in front.

He could afford to laugh later, Graham could not.