Home » Rugby League » From the Riewoldts to Jezza: The great AFL marks that won’t be forgotten

From the Riewoldts to Jezza: The great AFL marks that won’t be forgotten 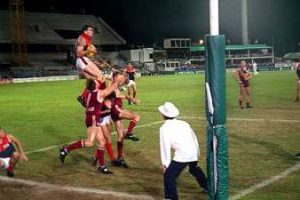 On the footy field courage can be defined in many ways.

To me, true courage comes from knowing the consequences, but still following through with the act. Every week, we see a number of those brave acts.

But in the past week it’s come into focus after Jack Riewoldt took his incredible mark, running back with the flight. 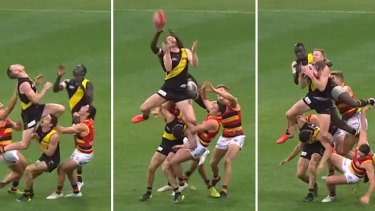 Naturally, the immediate question has been whether it was a better mark than the one taken by cousin Nick at the SCG back in 2004.

It got me thinking about the great marks of the game, and their standing in it. My first memory is probably of Michael Roach, the great Richmond full forward of the late 70s and 80s.

It was against Hawthorn at the MCG in 1979, that he took a towering pack mark over a number of defenders. That type of high marking is a defining feature of our game.

In my era, Gary Ablett did it often and Tony Modra was consistent in delivering the spectacular.

Shaun Smith took what is the classical Australian Rules ‘speccy’, when he launched himself onto the shoulders of his team-mate Garry Lyon. 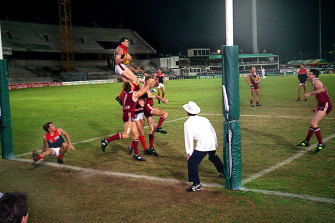 Shaun Smith flew high above the pack to take a grab for Melbourne.

Essendon’s Gary Moorcroft was almost horizontal when he climbed on Brad Johnson in 2001. That mark even more special because it seemed like the footy had passed him.

We’ve also seen Eagle Ashley Sampi who seemed to elevate himself twice in the one contest when he pipped Riewoldt for mark of the year in 2004.

Now there’s Jeremy Howe, who is the most natural high-flyer I’ve seen. By combining his leap with timing, he churns out big grabs with amazing consistency. 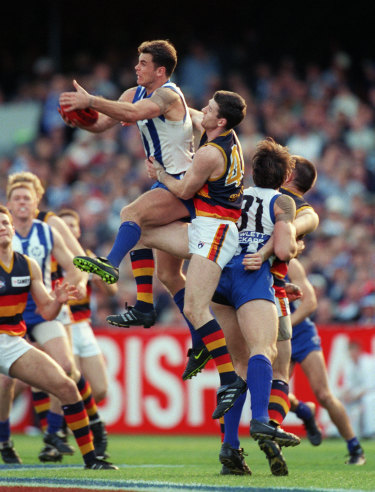 There’s also been marks elevated by their moment in time.

Alex Jesaulenko’s iconic grab against Collingwood in the 1970 grand final has been written into folklore, because of the occasion and the famous commentary: “Jesaulenko, you beauty!”

Leo Barry’s mark against West Coast in 2005 was crucial, while Brendon Goddard probably doesn’t get the plaudits he deserves for the hanger he took against Collingwood in the drawn grand final of 2010. 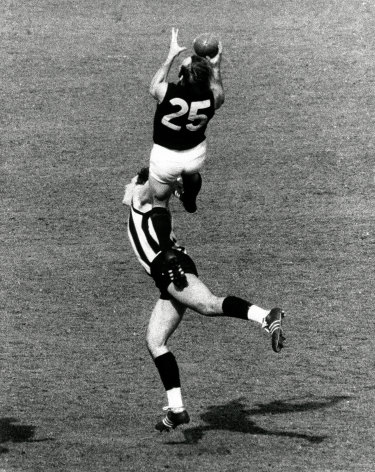 Goddard also went on to kick the goal, but it was overshadowed by the result itself.

Then you have the courageous – the type of marks where players seemingly have no regard for their own safety.

Backing back into traffic and having no idea what’s coming from behind is often underrated because it’s not as spectacular as running back with the flight.

One man who wasn’t afraid to do both was Jonathan Brown. The key to his trademark wasn’t just courage, but also a rare ability to read the play.

To mark the footy running back with the flight, half the battle is reaching the contest. It’s knowing when to pull out of your initial lead, before you turn and sprint back to where the ball is dropping. 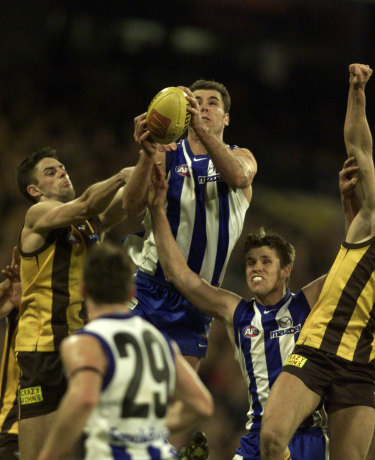 As Brown showed, to pull it off consistently you’ve really got to want the footy because your body is so exposed.

In time you can get this sense of what’s coming. Whether it’s peripheral vision, or simply experience that guides you. But you never really know what might hit you.

Brown had this ability to launch his body upwards at the footy and by doing so, it could provide a level of protection.

But, at times, he was also too brave for his own good and got himself into trouble suffering some nasty facial injuries after straight lining the footy.

That’s why Nick Riewoldt’s mark is the most courageous I’ve seen. The velocity he was travelling was fearsome. He propelled himself forward and only seemed to flick his body at the last millisecond to ensure he wasn’t wiped out.

Judging that mark against Jack’s is difficult. In many respects Jack’s mark was unique.

He combined the courage of his cousin with the high-leaping of his team-mate Shai Bolton. For degree of difficulty, Jack edges Nick and it’s why I’m prepared to say his was a better mark.

Often back with the flight marks are simply chest marks and that’s why they’re not always judged as favourably in mark of the year voting.

But not only did Jack run back with the flight, but he managed to elevate himself and turn his body in such a way that he still held onto the ball.

That ability to contort his body reminded me of Gavin Wanganeen in his Brownlow Medal year. Former Blue Kenny Hunter, too.

For a player to keep the footy in their grasp can be underrated from a bravery standpoint. Often, they can lose the ball on the way down, because they’re worried about breaking their fall.

It’s why Jack Riewoldt’s mark deserves to be in the conversation as one of the greatest marks, not just of this season but all-time.

At number one, I still have Shaun Smith simply because of his elevation.

But in terms of what will stick in the memory, Jack’s isn’t far behind.