Home » Rugby League » From the Archives, 2013: No lead big enough for the Roos in Cat fight

From the Archives, 2013: No lead big enough for the Roos in Cat fight 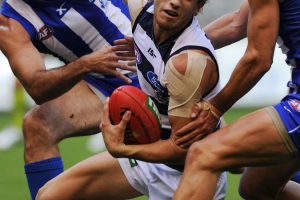 No lead enough in Cat fight

“I guess it’s slightly intimidating for opposition teams when they know they’re playing a team that will never give up.” 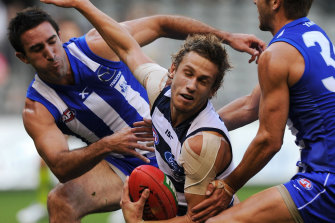 There would be few die-hard AFL fans, and certainly not any coaches, for whom Geelong coach Chris Scott’s post-match declaration would have been a revelation, after his team overcame a 41-point first-half deficit.

The coach he duelled with on Sunday, twin brother Brad from North Melbourne, was firmly among the coaches who realised that no lead is insurmountable when the Cats are involved, and their admired mindset where they “just refuse to be beaten”.

“We were under no illusion at half-time as to what was coming our way in the third quarter,” Brad Scott lamented after his team’s ascendancy for most of the match provided nothing more than a moral victory in the end. 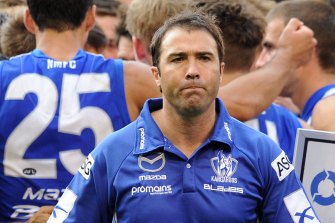 Kangaroos coach Brad Scott walks off the ground at 3/4 time.Credit:Getty

“We did everything we could to try and prepare our players … but they [Cats] are just an ultra-impressive football club. They’ve shown it time and time again, and they did again today.”

The intensity Geelong players showed in the second half was scarce in the first half, with Allen Christensen, Corey Enright and few others in a position to be proud of their performances.

North led in every key statistical area except inside-50 entries, and even in that area Chris Scott later admitted the quality of the Cats’ entries was inferior to what the Kangaroos were producing. The other difference was the greater number of Geelong players who at that stage of the game had had negligible influence. 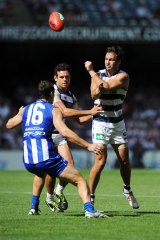 Kangaroos spearhead Drew Petrie, so conspicuously ineffective a week earlier, excelled with four goals to the main break. The resulting decision to replace Tom Lonergan as Petrie’s minder with Harry Taylor was one of two made by Chris Scott that turned the match. The other was his introduction of Mathew Stokes midway through the third quarter.

That Stokes was even the substitute was a surprise given his fine form of last week, although it probably reflected an emerging trend that a team’s substitute is not necessarily the 22nd-best player. “Stokesy is in our best 21,” the Geelong coach insisted afterwards – but one capable of having a major influence in a short period.

The Cats were already on the charge when Stokes replaced novice key defender Mitch Brown halfway through the third quarter, due largely to Paul Chapman’s dramatic increase in influence in the Cats forward half after a bad start, and Joel Corey’s composure out of defence.

That Stokes was able to snare five score assists during his cameo when the next best on the ground, Jimmy Bartel, scored three, reflected his influence.

Geelong outscored North seven goals to three in the third quarter to reduce the margin to nine points.

While that scoring rate was bound to slow in the last quarter based on how tired both teams were, the arrival of rain, because of a pre-game decision to leave the Etihad Stadium roof open, meant that a war of attrition was guaranteed.

Only two goals were scored in the last 20 minutes. Each was the result of a contentious 50-metre penalty and wrestled the lead back from the other team.

North started the last quarter poorly but got back in front after Mitch Duncan was harshly adjudged to have infringed on Daniel Wells’ free kick and the midfielder converted. Eighty seconds from the siren Bartel was barged into from behind, and then had his 40-metre kick taken to the goal line after Michael Firrito kicked the ball away.

Brad Scott rued the loss, given how much of the game the Kangaroos had been in front, but more lauded Geelong’s attitude.

The key characteristic of Etihad Stadium is its retractable roof, yet it proved irrelevant as much of the last quarter was played in rain. While the first half was played in sunshine, in the second half the sky got progressively darker, and then came the downpour. The AFL confirmed a decision on the roof had to be made about two hours before a match. Both coaches called for a blanket rule for the roof to be closed.

Geelong’s gamble at substituting a fit Mitch Brown midway through the third quarter could not have paid off more handsomely. Replacement Mathew Stokes played a pivotal role in the Cats’ comeback, snaring nine possessions in his first 15 minutes. Despite playing only 1½ quarters, he finished with 16 possessions and a game-high five score assists, prompting coach Chris Scott to declare it “as good as we’ve seen” of his players who have started the match in the green vest.

North Melbourne has started the season with two losses, but it should be bullish about Lindsay Thomas. The forward kicked four goals in round one and went one better against the Cats. He confirmed his accuracy problems were behind him in the last quarter when he goaled on the run from 50 metres.