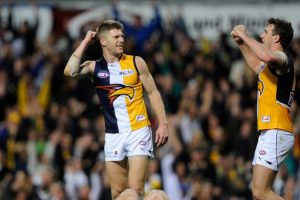 Big job ahead for West Coast as Blues fall 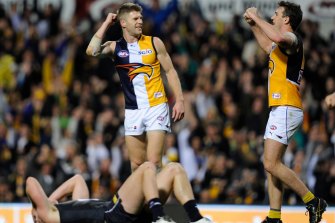 The Eagles looked to have the game in the bag when Mark LeCras kicked truly to give the home side a 21-point lead at the 22-minute mark of the final term. But the game was turned on its head when Carlton booted three goals in eight minutes to close within a kick.

Substitute Zach Tuohy had the chance to win it when he launched a scrambled snap in the dying moments, but Eagles defender Sam Butler punched the ball through for a behind to secure the 15.11 (101) to 15.8 (98) triumph. 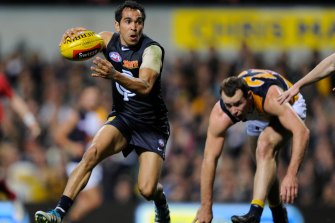 Eddie Betts gets away from Eagle Shannon HurnCredit:Sebastian Costanzo

West Coast’s first finals win since its premiership year of 2006 set up a dream preliminary final clash with Geelong at the MCG next Saturday, while Carlton’s season of promise is over.

However, Blues coach Brett Ratten is almost certain to have his contract extended after guiding his charges to fifth spot and an elimination final win over Essendon.

West Coast coach John Worsfold will also be given a new deal at season’s end.

Remarkably, he is just one win away from guiding his team from the wooden spoon to the grand final within the space of 12 months. 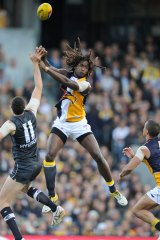 Nic Naitanui taps the ball away from Robert WarnockCredit:Sebastian Costanzo

Carlton skipper Chris Judd failed to fire for the second straight final, managing just 17 possessions against Scott Selwood a week after being held to 19 disposals by Essendon’s Heath Hocking.

Josh Kennedy’s night appeared over in the first term after a heavy head clash with Carlton’s Lachie Henderson left him feeling physically ill. But the 24-year-old returned to the fray in memorable fashion in the second quarter, booting a remarkable 65 metre goal that took a Shane Warne-style leg break before evading an outstretched Dennis Armfield near the goalline.

Carlton suffered a major blow on the stroke of halftime when utility Bret Thornton knocked himself out after flying high for a mark and landing heavily, forcing the Blues to activate Tuohy.

Thornton was taken to hospital to determine the severity of the head injury — the second time he has been forced to visit a Perth hospital this year after copping a heavy knock to the face in Carlton’s win over Fremantle in round 21.

West Coast coach John Worsfold said on television after the match that his men had no time to sit back and think about their achievement, saying they had a big job this week.

“Obviously it really comes down to the last seven or eight minutes when we are defending a lead and trying to hang on to it,” he said of the frenetic final minutes when Carlton fought it’s way back. “Sometimes that happens. They found a little bit of space and got those goals on the board. We weren’t too worried. We were comfortable to hold our nerve and just to wait and see how things pan out for the remainder of the quarter.

“I asked them to give what they want to give to each other. It’s not really about what I want them to give. Hopefully they will pull up reasonably well. We’ll make sure they are feeling good for a light run Wednesday before we head over to Melbourne.”

Carlton president Stephen Kernahan said: “We kept hanging in there. There are a few pluses out it. All the board wanted this year was the club to keep improving on and off the field and I think we have done that.

“We’ve settled off field. It’s all about onfield now and our team will get better. Couple of key forwards back and we’ll be dangerous. We have got to prove it from within. There’s that compromised draft so it’s hard to trade anything of significance.”