Home » Rugby League » From the Archives, 1999: Dons pay for narrow win over Dogs

From the Archives, 1999: Dons pay for narrow win over Dogs 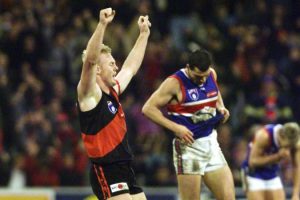 A severely undermanned Essendon last night showed enormous courage and depth to defeat the Western Bulldogs by four points in a thrilling contest at the MCG – 10.20 (80) to 11.10 (76). 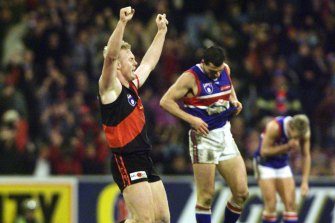 Injuries to three key players failed to stop the Bombers scoring an unlikely win, their fifth in succession and their 10th for the season and one that could push them to the top of the ladder at the end of the round. It was the first time the Bulldogs had been beaten since round six.

The Bombers lost star full-forward Matthew Lloyd late in the first quarter with damaged ankle ligaments. Full-back Dustin Fletcher did not take part after quarter-time because of a knee problem and Darren Bewick was forced from the field midway through the third term with concussion.

Lloyd was taken to hospital for X-rays, but no fractures were revealed. Coach Kevin Sheedy said a further scan would be ordered today as a precautionary measure. 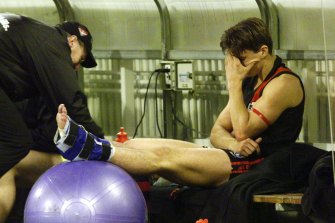 Matthew Lloyd on the bench at quarter time and out of the match with an injured ankle.Credit:Pat Scala

The Bombers will be missing their best three forwards for at least the next three weeks as Lloyd is tipped to join James Hird and Scott Lucas on the sidelines for rounds 14 to 16. Fletcher is likely to miss the next two rounds.

Sheedy said the Bombers finished with 16 fit players. “It was an exciting game to win for us regarding the circumstances,” Sheedy said. “There was no one else we could have put out on the ground at the end of the game.”

Bulldogs forward Rohan Smith kept his team alive with five goals after quarter-time, including the Dogs’ only two in the final quarter. 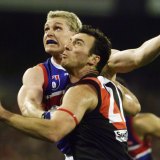 In a tense final term, no side could convert in the final 15 minutes as the ball was swung from end to end by desperate defences.

The lead changed hands with each of the four goals kicked in the third term. Again in the final quarter the lead swapped several times and scores were level twice.

At half-time Essendon held a two-point lead after losing its grip on the game early in the second term.

The Bulldogs took advantage of a weakened opposition when they booted the first four goals of the second term to kick away to an 18-point lead.

Lloyd hurt his left ankle after attempting to play on in the goal square. He was immediately tackled by Steven Kretiuk, who rushed a point, but in the process Lloyd’s ankle was caught in a tangle of legs and appeared to buckle.

The loss of Lloyd and Fletcher appeared to hurt the Bombers, who took 15 minutes to regain their composure and kick their first goal after quarter-time.

A soccered goal by Steven Alessio was followed by two goals to Blake Caracella in time-on. The first was courtesy of a perfect foot pass by Mark Mercuri, while the second was as a result of a free kick against Matthew Dent for a careless high tackle.

The Bombers did not reap the full benefit of their control as they had 6.12 on the board at the long break from 34 attacks inside 50 metres, while the Bulldogs entered their 50-metre arc 23 times for 7.4. 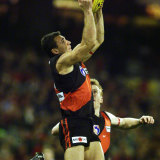 By game’s end, Essendon had had fewer possessions than the Bulldogs, but, as the Bombers’ high number of scoring shots indicated, they entered their 50-metre area 60 times to the Dogs’ 46.

Joe Misiti was a prolific possession-winner in the middle and dominated his battle against Scott West, while Mark Mercuri was excellent, first opposed to Todd Curley and then Nathan Brown.

Simon Garlick had the better of Michael Long, playing his 150th game, while wingman Paul Dimattina was too strong for Justin Blumfield and Mark Fraser. First-year player Mark Johnson helped turn the tide in the second half by curbing Dimattina and gathering almost 20 possessions.

Last night’s contest between the second and fourth-placed teams started in vigorous fashion with a free kick awarded to the Bulldogs before the first bounce after a free kick was paid against Bombers defender Dean Wallis after he clashed with Craig Ellis.

Minutes later field umpire David Howlett was felled in an accidental collision that resulted in a soft free kick to Wallis after being chested by Ellis.

An incident involving Fletcher sliding into Luke Darcy may be closely looked at on Monday by the AFL scrutineers.