From the Archives, 1999: Blues stun red-hot Bombers in prelim final 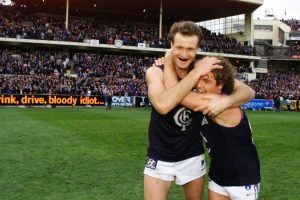 Season rolls on for eternal underdogs

Note the embraces, headlocks and backslaps among the bandages and icepacks. See the smiles and laughter on the faces of the fatigued. Wayne Johnston wrestling with Col Kinnear; David Parkin beaming, hugging a trainer. In the Carlton rooms, a preliminary had just been won, but it might as easily have been a grand final. 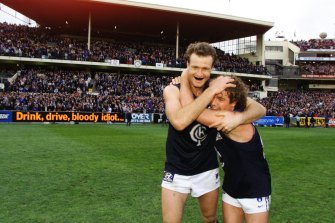 And perhaps, in some ways, it may prove to be. The Blues were never supposed to get this far. They had just pinched, by a point, a game that had seemed lost against a team that had seemed far superior. “Bizarre”, was how one player described the achievement, still to sink in an hour after the siren. Physically and emotionally draining, said Parkin, promising an easy training week ahead.

Still, is there a danger that, like Geelong in 1994, the effort required against Essendon will leave little to give on football’s biggest day of all?

“I hope not,” said Andrew McKay, wonderful all season and exceptional again on Saturday against could-have-been-matchwinner Mark Mercuri. “That was a fantastic win, but (we) had a bit of a chat and we realise we’ve got one more game to go. So we’ll be giving it our best shot.” 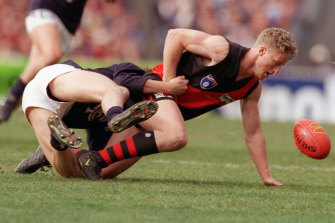 Players scramble for the ball.Credit:Sebastian Constanzo

If Carlton delves into history, then, it will look to the Crows rather than the Cats. It will forget that Geelong stole an after-the-siren victory over North Melbourne on the corresponding weekend five years ago and went on to an 80-point grand final drubbing from West Coast. It should think, instead, of Adelaide’s performance last year in rebounding from a massive qualifying-final defeat to win its next three games on the trot and claim successive flags.

“We hate to say it, don’t we?” said McKay of the Adelaide precedent. “But if they can do it, I suppose anyone can. So I’m sure that will be in the back of our minds, but in the forefront of our minds will be just trying to win the contest basically, because North are just so damn good at it.” 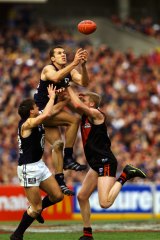 The Blues are already trying pretty darn hard to talk the Kangaroos up. The benchmark of the competition, said McKay of the Roos. Hoping they have an off day while we perform at our best, offered Michael Sexton. Keen for underdog status, admitted Parkin (who, incidentally, appeared just as keen to muzzle president John Elliott and, thankfully, Craig Bradley has already had a quiet word).

Certain to get it, too. Despite the colossal finish against Essendon of Anthony Koutoufides, since dubbed “last-quarter man” by his teammates after a remarkable solo performance. Despite the toughness and tenacity of Fraser Brown and Brett Ratten, and the contributions of such lesser lights as Dean Rice and Matthew Hogg. Despite defying most expectations a second straight time. And despite the Blues’ B-graders showing they could beat an A-grade outfit for the first time all season.

So much, indeed, for Parkin’s fear Carlton may be embarrassed. “We’ve ended up with one of the great Carlton days, so that’s good for our supporters, and a wonderful thing for this team, which has struggled really in terms of its depth and sometimes in terms of its class,” he said. “So they’ll get an enormous amount out of today, for both the short term, that is next week, and for the seasons that are coming. I think it’s been a massive step forward.”

But back to the short term. Adrian Hickmott has a grade-one hamstring tear and is unlikely to be fit, despite his optimism. Considering Carlton‘s minimal depth, which Parkin estimates stretches to just 22 “genuine” league players, Anthony Franchina is likely to return directly from his two-match suspension. Aaron Hamill, reported for kneeing, may make a forced exit. 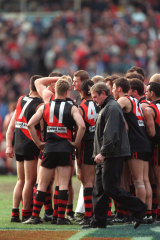 Both Blues would be playing in their first grand final, yet there were 12 survivors from the all-conquering 1995 premiership side in Saturday’s 22. How different the preparations, though. This Carlton team had to regroup from the Lions’ drubbing, thank the luck of a draw that had them play a home semi against West Coast, and vow to grasp the opportunity.

“We’ve built up a fairly strong self-belief now, but if we do win the grand final I guess we’ve pinched it, whereas in ’95 we set a lot of records and were looking the goods all year,” said Sexton. “This is obviously very different, but a grand final’s a grand final, and if we win it, we’ll take it all the same.”

Still, could it be a grand final that, in some ways, has already been played? “I think there’s always that danger,” Parkin admitted. “(But) I thought we played our preliminary final last week, too. So we’ll have to wait and see. I hope we can make it a genuine grand final of quality. I hope we can.”