From the Archives, 1981: Sunday football trial a big success 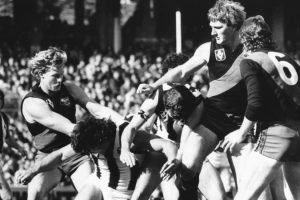 Sunday VFL football came to Melbourne yesterday for the first time since a first round game was played before the Queen 11 years ago.

The VFL president, Dr Allen Aylett said the trial was a huge success. “There is no doubt the football public wants and enjoys Sunday football.” 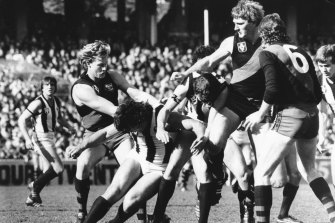 In the members’ stand Mr Bob Maguire, of South Melbourne, wearing an MCC guest badge, gestured in the general direction of the spectators below, “You ask me if I want Sunday football. It doesn’t matter what I want, this is bread and circuses for them. They’ll always need this so long as people are being squeezed economically from Monday to Friday.”

And the ban on grog?

On a terrace in Bay 13 stood Collingwood fan Robert Rowe. On a normal day he would have brought in eight cans so it was no wonder that he saw the enforced dry through different eyes: “Terrible. It’s disgusting. I won’t be coming to one of these again.”

And he said that while the Magpies were three goals in front.

Essendon went on to win by 19 points.

The match was of the highest standard, and included all the highlights of Australian football. Yesterday’s win has stretched Essendon’s winning sequence to 15 – three of them at night – and lifted the Bombers to third on the VFL table.

MSS security officers, police and turnstile operators agreed that the total liquor ban which was a condition of the trial Sunday match was effective. By three-quarter time, ushers had asked only three people with portable coolers to leave.

A turnstile man on Entrance 5 said: “the crowd’s a lot better behaved than on a Saturday. We’ve only been abused twice today.”

One of the 30 security guards who patrolled the kilometre-long queues from early morning admitted: “You’ll see a few stubbies around. We’d have to sample everything: I mean, if you wanted to put a dash of whisky in a thermos you could have Irish coffee, couldn’t you!”

For the citizenry of Richmond the arrival of Sunday football meant nothing more than a pain up the side-street.

From Abbotsford to the Yarra, the suburb of Richmond was converted into a Little Belfast for the day. Council employees in white suits with yellow stripes sat on sentry duty in a chair beside the barricades which sealed off the no-go area.

Having battle her way into the enclave, Mrs Robyn Hilyard of Kew said: “I think VFL Park is the place they should play Sunday football. The only reason they built out there was to play football, so why don’t they? The VFL think they’re God.”

To protect its ratepayers against the onslaught, Richmond City Council issued two parking authorisation tickets to each household, and waived parking fines for residents “nicked” on the weekend in question.

Neither measure is likely to save the owner of a Holden Premier parked near Tyson Street, Richmond. On the windscreen were a parking permit and a parking ticket; perhaps it was the tell-tale “Football Record” left on the dash which sowed doubt in the officer’s mind.

One of the five Richmond council inspectors who started work at 10 am had booked 30 drivers by halfway through the second quarter, and said his colleagues had been every bit as busy. At $18 a throw, that would add $2700 to the city coffers.

But it seemed unnecessary. Yarra Park had plenty of car spaces as late as 3 p.m. 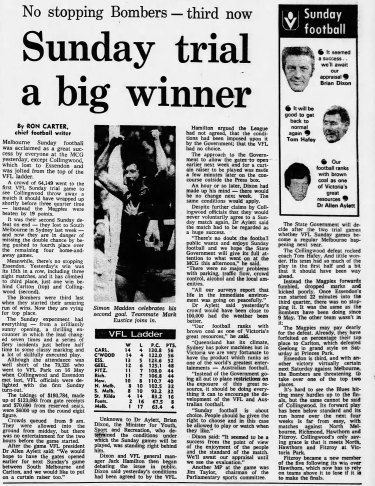 The match report published in The Age on August 3, 1981.Credit:The Age Archives