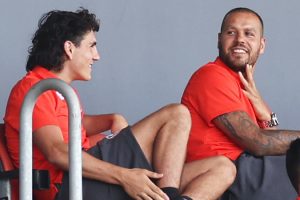 Logan McDonald has given Swans fans a tantalising taste of the future as Sydney’s prized draft pick presented a compelling case for round-one AFL selection in a tidy two-quarter cameo on Sunday.

Introduced at half-time of the Swans’ pre-season clash against Greater Western Sydney, the 18-year-old forward made an immediate impact, kicking a booming set-shot goal with his first touch while giving his side the attacking focal point they have desperately missed during Lance Franklin’s extended absence. 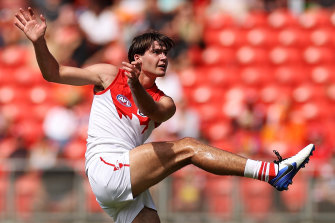 Logan McDonald mounted a strong selection case with a two-quarter cameo against the Giants on Sunday.Credit:Getty

“When he started that third in particular, he was very good,” he said.

“He came off at one stage and said ‘gee, it’s quick’. That’s just getting used to the tempo at this level – it goes up another gear in a couple of weeks.

“We certainly thought he was able to give us another marking target in our front half, which enables us to do other things with [Isaac] Heeney and others.

“We’ve got to understand that young key forwards, they do take a bit of time to get into their body. He got pushed out a few times but he’s smart, he works hard, he’ll give it everything he’s got … he’s not a bad looking player from what we’ve seen so far. 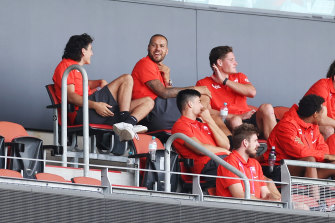 “There’s going to be bumps and ups and downs – that’s OK, he’s got a great attitude.”

Longmire could give no timeframe around the return of Franklin, who didn’t play a single game last season due to repeated soft-tissue injuries.

“He’ll play when he’s ready to play. Hopefully if he continues the way he’s going it’ll be pretty early, but it won’t be round one,” he said.

“Everyone gets caught up this time of the year about it – fascinates me. It’s one game, it’s an important game, but it’s not the only game of the year.”

The Giants kicked the first four goals of the match on Sunday and, aside from the third quarter, were largely in control all afternoon.

They were also well-served by youth, with first-round draftee Tanner Bruhn kicking four goals from 11 touches – earning a comparison from coach Leon Cameron with none other than teammate Toby Greene, who kicked three.

“He’s really creative,” Cameron said. “He’s probably in that mould of … I don’t want to put too much pressure on him, but how Toby Greene started out his career – just a ball-hunter, they want to get their hands on the footy. I was really rapt for a young kid to kick four goals, even though it’s a practice game.”

Just over 3000 fans turned up at Olympic Park for what was the first AFL match with crowds permitted in Sydney for eight months.