Franklin fires with four but Port prevail in a thriller 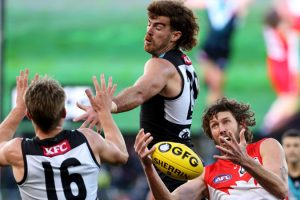 Sydney’s week of upheaval ended in heartache despite a herculean performance by Lance Franklin as Port Adelaide withstood a stirring fightback by the Swans to prevail in a pressure-packed game at Adelaide Oval.

The Swans’ attempt at a fly in, fly out heist was thwarted by unlikely heroes in supersub Sam Mayes and ruckman Scott Lycett, whose goals in the closing minutes were enough to clinch a 12.9 (81) to 10.11 (71) win for Port. 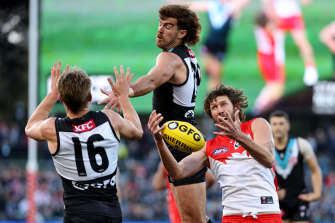 In one of the best games of the season, Franklin was instrumental to the Swans’ revival. Quiet in the second and third terms, he burst to life with three goals in the final quarter to give his team the lead entering time-on, but Port gritted their teeth against the run of play.

Franklin’s four goals took him past Richmond great Jack “Skinny” Titus into sixth on the AFL’s all-time goalkickers list, but his night was soured by a report for forceful contact on Jarrod Lienert in the first quarter. 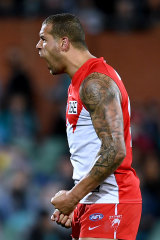 The result has left Sydney’s position in the eight up for grabs in the coming weeks with games against West Coast and the Western Bulldogs in Victoria. It was a vital win for the Power, who returned to the top four.

Port had the edge in the midfield, where Travis Boak overcame a dogged tag from George Hewett to finish with 30 possessions. Ollie Wines was also influential. In conditions to suit, Luke Parker and Callum Mills were key midfielders.

The Swans were lively when conditions were dry in the first quarter, which suited their slick ball movement from defence, but their game broke down after the rain tumbled.

The match-up of Will Hayward against Aliir Aliir was a win overall for the Swans. Hayward scrambled Aliir’s radar, often taking him out of position so that the former Swan did not have a play at the incoming kick.

Aliir had little impact in the air and Hayward was too nimble at ground level, his two goals a bonus. Aliir, though, did have a big moment in the closing stages of the game, taking a clutch contested mark in the centre square to repel a Swans forward thrust.

What had been a free-flowing game turned into a battle of attrition after a downpour early in the second term.

The Swans had the edge in the territory battle but Port proved more dangerous in attack, where Charlie Dixon was a handful for Tom McCartin.

Dixon’s impact was dulled after a heel injury late in the third quarter but, on one leg, he made a key play late in the final term when the game was on the line.

Port lifted their intensity another cog after half-time, trapping the Swans for long periods in their defensive 50. When they were able to clear the danger zone, it was under duress, with little system, which made life difficult for their forwards.