Home » Four Points: Time for a fresh start and for Collingwood to release the shackles

Four Points: Time for a fresh start and for Collingwood to release the shackles 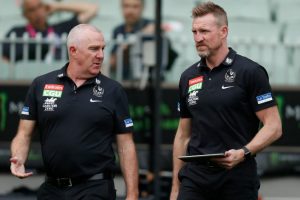 On a bright, sunny MCG Saturday afternoon against another lowly team, Collingwood kicked two goals in a half. This is not an aberration. 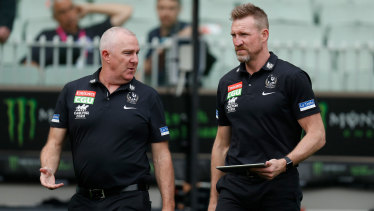 Since round seven last year, when they defeated Geelong to go to third, the Magpies have won seven of 19 games, beating Sydney, Adelaide, North, Carlton, the Suns, and then the Eagles in the thrilling upset final in Perth last year. This year they have beaten just Carlton.

The remedial action taken with the list and the salary cap at the end of last year was also supposed to have precipitated an overhaul of the method of play, which it was then admitted was failing as they needed to score more heavily.

In the off-season we saw the list change but not the game. This year the major change has been that now Collingwood not only don’t kick a winning score, they now don’t defend one, either.

They play adventureless, boring, nervous football that is out of pace with the daring trend of the game.

Still Collingwood fold their wingmen behind the ball defensively to act as pseudo seventh and eighth backmen. Almost weekly an opposition wing is among the best on ground – Bailey Smith round one, Hugh McCluggage round two, Lachie Ash round four, Andrew Gaff (38 touches) round five, and Brandon Ellis on Saturday – because no one really plays on them.

They play adventureless, boring, nervous football that is out of pace with the daring trend of the game.

It would be an awful job to play high forward at Collingwood at the moment trying to run to cover the absent wings and still be available as a target or crumb in an often outnumbered forward line.

They have had a look at Darcy Moore forward for a few weeks and it was a worthy experiment but at present it feels like they have taken a 9/10 All-Australian key back and made him anonymous. That said, it also feels like ball movement remains the far bigger problem than who they are kicking to.

The players look tentative and worried about making a mistake for as with all teams playing badly they lose the freedom and flow in their game. Ordinarily, though, youthful teams – such as Collingwood’s with five players with fewer than five games in them – play with excitement and dare. Collingwood look burdened. 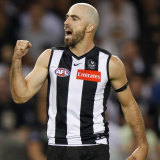 Returning Steele Sidebottom to a wing could help free up the former All-Australian.Credit:Getty Images

Collingwood need to release the shackles and simplify their game. Push Steele Sidebottom – who needed to be tagged as a wingman in 2018 when he was among the most creative and dangerous wings in the game – outside the square. He has never been a good first touch player, so return him to a wing.

Bring Tyler Brown and Fin Macrae into the square, as Josh Daicos has successfully been moved, and give them an extended run on the ball. They are inside players, not wings or flankers. It’s probably time to swing Moore back to return some ballast to the team and the system and give the players comfort that he is there so they can feel more freedom and licence to run and take the game on. They need to play more on instinct.

Presently Collingwood make it easy for teams to pick through them with uncontested ball movement.

Injuries have doubtless hurt a side that lacks experienced depth, with the loss of last year’s All- Australian Taylor Adams and Jamie Elliott denying them their two best first-touch on-ballers. Collingwood struggle for clearances without them and with a ruckman in Brodie Grundy who, aside from a very good game against West Coast, has been well below par.

It might sound retrograde given his age but bringing Levi Greenwood in – once fit – to lock up the best opposition midfielder might at least stem the bleeding. Darcy Parish belted them last week and it was Touk Miller on Saturday who ran amok. No one closed either of them down. If zone football is not working and teams are rifling through you then you have to change something in-game to shut a player down.

The issue that hangs over the season that is slipping away is the Nathan Buckley coaching contract.

At the end of 2017 Collingwood’s review saw Buckley re-signed and others around him changed. It got results.

The AFL rightly admitted umpire Matthew Nicholls blundered with the play on call that denied Jeremy Cameron a mark and shot at goal on Saturday night.

On Sunday in Tasmania for Melbourne and North Melbourne the umpires appeared to offer solidarity with Nicholls with regular calls for short kicks. A crackdown is long overdue.

It didn’t change the result of the Geelong-Sydney game but work with me here. When centre bounces go astray and need to be recalled, the clock does not re-set. It should.

Then think about how those seconds can mount and deny you at the end of a quarter, such as when Joel Selwood has James Rowbottom wrapped up in a tackle after he dived on the ball. Rowbottom would have been pinged if the game went a second or two longer.

Now, on Saturday night not one centre bounce went astray in that final quarter so no time was lost, but the point is still valid for other matches. If you re-set for the bounce you should re-set the clock.

Frank Costa was one of the most transformative football club presidents the game has seen. Geelong would not have had the success they have had without Frank. A warm and genial man, he had his stamp on Geelong as a club. A terribly sad loss.