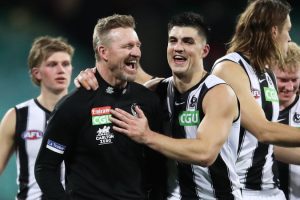 The memory that should be preserved from Nathan Buckley’s final game representing the Collingwood Football Club should be this: the man himself, famously granite-faced and intense, smiling and hugging the players, one by one.

He had reason to smile about the result, and that his players had given him the send-off victory over a subdued Melbourne that his magnificent service to the Collingwood cause and to the game warranted.

Buckley’s demeanour bespoke a man who was completely at ease with his exit and probably relieved that the siege – 10 years of it coaching the most visible club in the country – had lifted. 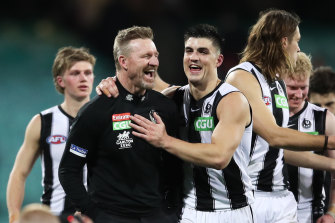 This was a very modern coach exit – one devoid of bitterness, completely accepted by the coach, who has, over his career, gradually won over his many critics by dint of his dignity.

Buckley was in an unnatural state for a coach – and himself – on game day: comfortable and relaxed. He would later say that he felt calm for the whole week, once his departure had been announced.

“It’s awesome,” said a grinning Buckley on the SCG turf – a small plot of which had been given to him before the game to commemorate his farewell. “It’s going to be a pretty good footy team.”

It was natural to wonder why these players had not been able to summon the same effort, the same composure, the same fluency of ball movement, several weeks earlier. If they had done so, would Buckley be coaching on into 2022 and beyond, piloting a rebirth from the wreckage of 2020’s post-season? 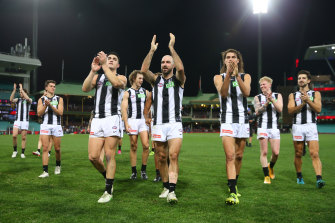 Collingwood celebrate their win over Melbourne at the SCG. Credit:Getty Images

But the two players who most encapsulated the Buckley tribute victory were two very different characters, indeed almost the two poles of the team: the skipper Scott Pendlebury and the team’s highly talented cowboy, Jordan De Goey. They had clearly their best performances of 2021, as did Brayden Maynard.

Collingwood has usually played almost as hard for Buckley as he did for them. The difference in his final game as coach, perhaps, was that the players shared the coach’s mindset – they, too, were playing without anxiety as the siege lifted. They were, on this day, as one with Buckley.

Buckley’s near misses as a player and coach have a folkloric quality and will be discussed for decades hence. At the end, Buckley posed a question befitting someone who had accepted the perverse turns of his Collingwood career: “What is ultimate success?”

If he did not get the conventional measure of success – a premiership – he cannot be said to have failed, either. 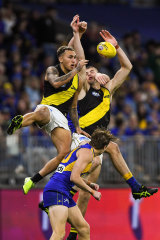 The most important consequence of West Coast’s stirring comeback win over Richmond is that the Tigers will almost certainly have to attempt to win the premiership from the lower half of the top eight.

Richmond is far, far better than a 7-6 team. Their best will test or best anyone’s, but the loss to the Eagles – which still could have been won if Jason Castagna had lowered his eyes (one of dozen or so maybes for Richmond) in the final seconds – means the top four seems beyond their reach.

The Tigers would need to win each of their nine remaining games to be assured of a top four berth – even eight wins would be dicey, given their relatively poor percentage and the gap between them and the current top four.

So, the upshot is that they’ll probably be coming from an elimination final, hoping to be hosting that game in Melbourne (and avoid the Eagles in Perth). It’s a scenario that is far more challenging than any of their three flags, in which they finished third.

The match was memorable for the heroics of Josh Kennedy – still a nimble force in his 16th season – and for the astounding talents of Nic Naitanui and Dustin Martin. Shai Bolton, too, is emerging as Martin’s apprentice; there’s a sense of Lillee and Thompson about Martin-Bolton – if Dusty doesn’t get you, Shai might.

Richmond can progress much further. In racing parlance, they’ll just have to do from three wide.

As we pick apart St Kilda’s capitulation to the Crows, the ambiguity of the David Mackay-Hunter Clark bump, the result should be a sobering reminder to the Saints that they are not a team within cooee of the premiership and need to recruit accordingly.

The Saints did very well to win a final last year and while injuries have played a role in their slide, the decision-makers at Moorabbin will surely know that their playing list has significant holes and the midfield is the area of greatest need.

While the absence of Paddy Ryder and Rowan Marshall for too many games has really hurt, the lack of A-graders around the ball is more telling.

Jack Steele is the only midfielder in the elite bracket and the Saints should think very carefully about whether Ben King of the Suns should be a priority, when the obvious conclusion of their failures – aside from a lack of depth exposing the thin line between finals and the bottom six – is that they a) need midfield class and speed and, b) they must be eyeing the draft, rather than trying to plug holes with trades.

Whatever path Collingwood takes on Buckley’s replacement, clubs and coaches are dealing with a different landscape due to the greatly reduced spending on football departments.

Alpha coaches, such as Alastair Clarkson and Ross Lyon, might have been the automatic first choices as proven commodities. But clubs are staring at only modest increases in football spending, due to the slashed soft cap, and this means they have to weigh up the total cost – and whether they can pay a coach around $1 million in a soft cap of only $6.5 million, which is the likely scenario next week.

An untried assistant might command not much more than half that amount and even if the AFL exempts part of the senior coach’s wage (as they are considering), the Alpha coach is less attractive when there’s a smaller budget. Or they can accept that the salaries of 2018 and 2019 aren’t coming back for a while.