Home » ‘Footy isn’t the most important thing for me right now’: Papalii

‘Footy isn’t the most important thing for me right now’: Papalii

Raiders star Josh Papalii has revealed how he and Canberra coach Ricky Stuart reached the decision together to give him a “mental break” and declared: “Footy isn’t the most important thing for me right now”.

Papalii rated himself a “50/50 chance” of returning for the Green Machine next week, and was still weighing up whether to make himself available for the Queensland Origin campaign. 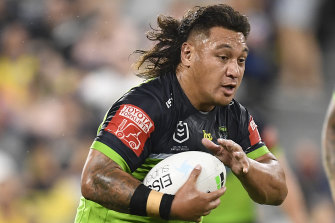 “Footy isn’t the most important thing for me right now and I need to mentally freshen up,” Papalii said. “I think with the late finish last year, playing for Queensland, jumping into the boxing [with the charity fight against Ben Hannant] and then going straight into the pre-season, I thought I’d be alright but it’s obviously taken its toll.

“I don’t regret the boxing at all. It’s just the way the season has panned out, losses take a toll on players and coaching staff and the whole club. We haven’t had three straight losses as a club in a long time.

“I’ll be with the boys at the Souths game and in the sheds and then spend time with my wife and kids.

“I plan to come back next weekend, but it’s only 50/50 at the moment. If the boys go well there’s no reason for ‘Sticky’ to change the team next weekend. I’m not looking that far ahead.” 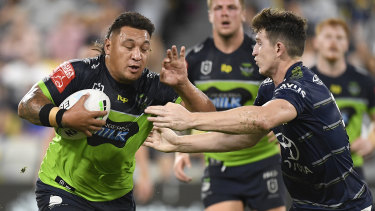 The Raiders forward carting the ball up against North Queensland last Saturday.Credit:Getty Images

Papalii has terrorised NSW in the Origin arena but kept quiet about his availability for this year’s series with the first representative teams to be picked in a month’s time.

“It’s always an honour to pull on the Queensland jersey, I’ve been a big part of them the last few years, but my focus is on the Raiders right now,” Papalii said.

“I just need to worry about me right now. I have a high standard I set for myself, I know where I want to get to, my numbers are fine – I’m not really a stats person and try to run a certain amount of metres – but I just don’t feel like I’m where I want to be mentally.

“‘Sticky’ [Stuart] and I both came up with this decision. He has to pick a team, we’ve lost three in a row. There’s no family drama, no depression or financial dramas, it’s just my thinking and me knowing things aren’t going as well as they should be.”

Papalii has been rated the world’s best front-rower in recent years and was a huge reason the Raiders made it to the preliminary finals last season. Canberra’s forward pack was ravaged by injuries and Papalii, 28, was an inspirational figure for the side. His 60-metre sprint to chase down Gold Coast halfback Jamal Fogarty was one of the 2020 NRL season highlights, which was later commemorated on a limited-edition pair of Budgy Smugglers.

The Raiders were tipped as potential grand finalists for 2021 but had won just three of their opening seven games before taking on Wayne Bennett’s heavyweights Souths on Thursday evening.