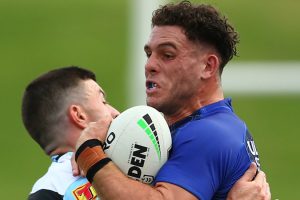 Adam Elliott, in typical rugby league fashion, made the type of late contribution his coach wants him to be known for.

If the off-season scandal of a couple of weeks ago, when he was caught in an intimate act with the fiancee of former teammate Michael Lichaa, was meant to define his summer, then someone forgot to tell him. 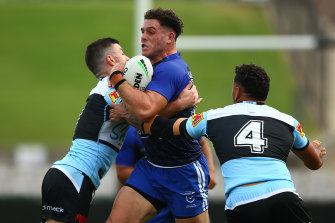 Adam Elliott scored a crucial try for the Bulldogs against the Sharks.Credit:Getty

He was reminded about the headlines on Saturday night, with a few quips from Sharks players. He’ll have to live with them for a while yet.

But in a match that finished in near darkness, with the floodlights only functioning right on full-time, up popped Elliott to inspire coach Trent Barrett’s first win for the Bulldogs.

The back-rower, who will play on an edge this year after trading places with captain Josh Jackson, skittled three Sharks defenders to help the Bulldogs to a spiteful 16-12 trial win at Netstrata Jubilee Stadium.

A healthy crowd could barely see the final few minutes in the dusk, but they will remember Elliott’s barnstorming try. It saw the Bulldogs overcome a 12-point deficit and was his last contribution of a match in which Sharks coach John Morris pulled skipper Wade Graham, Matt Moylan and Chad Townsend from the field in the final quarter.

In a summer that featured the usual scandals and surprise signings, Kyle Flanagan came close to returning to the Sharks after ruthlessly being shown the door by the Roosters after just one year at Bondi.

If he wanted to know if there was any resentment from his old Cronulla teammates, he didn’t have to wait long for an answer.

Graham decked Canterbury’s new No.7 multiple times after kicking in the first half, the last of which sparked Sione Katoa to rush in and protest with the former State of Origin representative before others followed.

Referee Gerard Sutton blew a penalty, but it was about as much joy as Flanagan would get in a first half dominated by his old team.

Flanagan earlier dragged down Will Kennedy in a try-saving tackle, but the Cronulla No.1, fighting to cement his spot in Morris’ round one team, threw the final pass for two tries in the first half, both scored by the impressive Ronaldo Mulitalo.

Perhaps more pleasingly for Morris was the involvement of Matt Moylan in both. Having not played since August and only featuring in 19 games in the last two years, Moylan faces a career-defining year. This one, at least, couldn’t have started better.

He should have had a try of his own but Jack Williams didn’t pass to the five-eighth when Blayke Brailey had put the interchange forward clean through.

Barrett has pledged the Bulldogs under his watch won’t be beaten on effort. On this first display, it’s hard to argue.

Clearly second best in the first half, his side showed the type of resilience their fans are craving and cut the half-time margin when Dallin Watene-Zelezniak scooted over in the corner after nice touches from Brandon Wakeham and Corey Allan.

His new boys Nick Cotric, Allan, Jack Hetherington and Corey Waddell were all solid and when Elliott burst onto a Flanagan pass, the Bulldogs trailed by only two points inside the last quarter.

The news was soured when Cotric left the field gingerly and had a foot iced late in the game.