Corey Norman’s time at the St George Illawarra Dragons is coming to an end after club officials informed the five-eighth his contract would not be extended beyond the end of this year.

It comes as a former Dragons five-eighth, Gareth Widdop, has attracted interest from Canberra about potentially returning from the Super League next year to replace George Williams in the Raiders’ No.7 jersey. 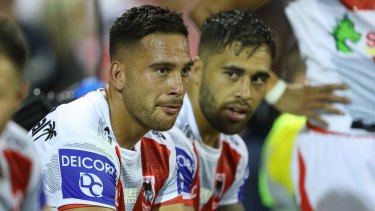 Corey Norman will depart the Dragons at season’s end.Credit:NRL Photos

The Herald contacted St George Illawarra officials on Monday afternoon, with the club confirming Norman had been told of the decision at a meeting last week. The Raiders also confirmed their interest in Widdop, but insist an offer hasn’t been made.

The Dragons have opted to invest in their juniors, with Jayden Sullivan and Junior Amone set to battle it out for the chance to partner Ben Hunt in the halves next year. The other option at the club is Jack Bird, who played five-eighth at the Sharks in his debut season before moving to the centres later in his career.

It’s understood coach Anthony Griffin initially wanted Norman to remain at the club. However, there was little support from others at the Dragons for the 219-game veteran to stick around.

Norman, who played his 50th NRL game for the Dragons in Monday’s clash against Canterbury at Stadium Australia, joined the club from Parramatta in 2019. Before Monday’s game he had helped the Dragons to 20 wins in those 49 games. 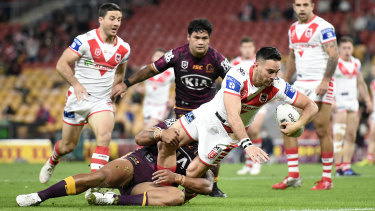 Corey Norman has experienced the highs and lows during his time at the Dragons.Credit:Getty Images

The decision not to extend Norman has left the 30-year-old at a crossroads in his career as he looks to find a new club for 2022. It’s unclear if the Dragons will continue to use Norman for the remainder of the year or begin planning for the future.

The news of Norman’s forthcoming exit comes just a couple of weeks after the Dragons’ controversial decision to part ways with fullback Matt Dufty at the end of this year, opting against renewing the services of one of their biggest attacking weapons. The Dragons believe Dufty’s defensive deficiencies counteract his prowess with the ball in hand.

Dufty met with Canberra officials last week, with the Raiders considering offering him a position in the nation’s capital.

Injured Raiders fullback Charnze Nicoll-Klokstad is recovering from season-ending neck surgery, with the club hopeful he makes a full recovery from the delicate procedure. There is also a thought to move Nicoll-Klokstad to the centres, where he has played for New Zealand, in a move that would accommodate the potential arrival of Dufty.

Dufty could reunite with his former Dragons skipper, with Widdop’s manager requesting around $500,000 to join the Raiders next year. The Warriors are also interested in Widdop’s services.

The Raiders have removed themselves from the race for Shaun Johnson’s contract, with the Bulldogs now one of the leading contenders to land his services.

The Bulldogs have opened communication with Johnson’s manager, but they still have Kyle Flanagan, who returned from injury in NSW Cup on Monday, on the books for another two seasons.