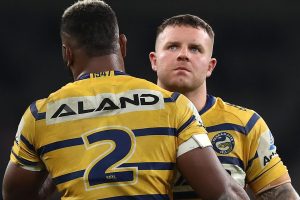 The Dragons are fed up with NRL player managers using their club as “contract bait” to increase interest in off-contract players after being falsely linked to Eels star Nathan Brown.

The Daily Telegraph reported Eels lock Brown is the latest player to be falsely linked to the Dragons, with the club taking the unusual step of calling the Eels directly to confirm they have no interest in the Origin star.

The 27-year old comes off-contract at the end of the 2021 season and hopes to remain at Parramatta long-term.

NRL: After signing with the Rabbitohs till 2024, South Sydney recruit Jai Arrow is confident his new team will amongst the Premiership contenders in 2021….

NRL: After signing with the Rabbitohs till 2024, South Sydney recruit Jai Arrow is confident his new team will amongst the Premiership contenders in 2021.

SUAALII WATCH: How you can see teen Chooks stars in action on Kayo

According to The Daily Telegraph Brown is currently on a deal worth approximately $620,000 per season, while his management are looking to secure a new deal north of $700,000-a-year.

In a desperate bid to maximise his next contract, Brown’s management, led by NRL agent Jonathan Wehbe, told the Eels that the Dragons were showing strong interest in the NSW representative.

Upon hearing the reports the Dragons then immediately contacted the Eels to deny any interest in the lock.

‘IT HURT’: Mansour lifts lid on brutal Panthers exit ahead of Bunnies debut

LOCKED IN: Storm hopes of O’Brien reunion over after Knights coach extends deal

The Eels were told that up to three NRL clubs were also chasing Brown, but The Daily Telegraph revealed that no clubs have been identified with showing genuine interest.

Brown has played 100 NRL games since his debut for the Tigers in 2013, before moving to the Rabbitohs and then the Eels where he has played 71 games since 2017.