Home » Rugby League » Despite inroads, the AFL has a long way to go on gender equality

Despite inroads, the AFL has a long way to go on gender equality 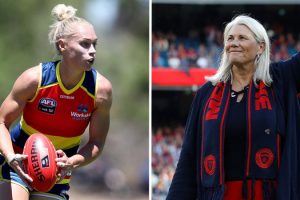 Gender equality is a key issue the AFL needs to address under the incoming CEO, according to The Age survey of club bosses.

Eleven of the 16 bosses to respond to the survey agreed that gender equality remained a problem in the AFL, although one boss said there were signs of improvement in the area. 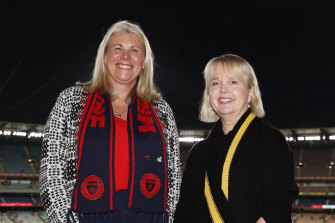 In 2022, all clubs will have both AFL and AFLW teams. However, male CEOs lead all 18 clubs and just four clubs have female presidents: Melbourne’s Kate Roffey, North Melbourne’s Sonja Hood, Richmond’s Peggy O’Neal and the Western Bulldogs’ Kylie Watson-Wheeler.

O’Neal is stepping down at the end of 2022, having led the Tigers to three flags, with four of the past five premiership clubs in the men’s competition having female presidents.

Three of the eight members of the AFL Commission (which includes departing CEO Gill McLachlan) are female while 28.75 per cent of people sitting on AFL club boards are female. Only two AFL clubs have boards with an equal split of females and males.

The AFL has never had a female chair or CEO in charge while the AFLW competition will have three female coaches among the 18 clubs when the new season kicks off. Bec Goddard (Hawthorn), Natalie Wood (Essendon) and Lauren Arnell (Port Adelaide) have landed jobs at the expansion clubs. There has only been one permanent club CEO who was female, with Tracey Gaudry’s time at Hawthorn in 2017 shortlived.

One club boss said the industry needed to “set and meet targets to improve gender equality” in the industry as it emerged from its male-dominated past.

The accelerated coaching program is one example of a policy change to improve the representation of females in key areas of the industry. Daisy Pearce will take up a coaching role at Geelong as Erin Phillips joins Port Adelaide and Chelsea Randall becomes a coach at Adelaide under the program.

The AFL Players’ Association has an equal split on its board for the first time.

There are about 540 female players on AFLW lists in 2022. The AFLW competition began with eight competing teams in 2017.

The AFL announced in July last year that respected businesswoman Rhonda Brighton-Hall would examine equal-opportunity policies, workplace training to counter discrimination and harassment and the complaints-handling process at head office as the league reviewed aspects of its culture and attempted to create an environment conducive to a diverse workforce.

Three of the nine members of the AFL executive are female with commercial executive Kylie Rogers considered a candidate for the AFL CEO job.