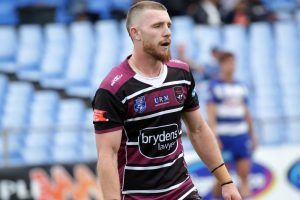 Jackson Hasting’s three-year exile from the NRL is about to end, according to a report which claims the desperate Wests Tigers are circling the Wigan star.

Hastings has been on the radar of NRL clubs since re-building his career in the UK Super League, which included winning the Man of Steel Award as the competition’s best player.

The sacked Sea Eagles and Roosters playmaker signed a new contract with Wigan last year, which would only make him available to return to the NRL in 2022.

However, the Sydney Morning Herald now reports the Tigers are set to offer Hastings a deal through to the end of the 2023 season, and would result in Hastings making an immediate move to the club.

The report claims the Tigers will likely have to pay a transfer fee to force Wigan to release Hastings from his contract.

Hastings is expected to request a release on compassionate grounds of returning to his family in Sydney.

The report claims the Tigers have not lost faith in under-fire halfback Luke Brooks, but are exploring all options to save their season following ugly losses to the Roosters and Raiders.

Hastings has repeatedly declared in public he has been trying to resurrect his career after his termination from the Sea Eagles resulted in every NRL club closing their doors on him.

The rumours surrounding his reported altercation with Cherry-Evans and attitude problems were so damaging he was forced to move overseas to continue his career.