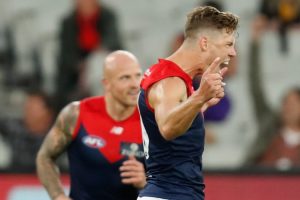 Unbeaten Melbourne are facing an extreme selection squeeze for Saturday night’s Anzac Day eve blockbuster against reigning premiers Richmond, with Ben Brown and Sam Weideman fit to play and Steven May and Bayley Fritsch both possibilities to return.

The Dees surged in the final quarter to beat a persistent Hawthorn by 50 points at the MCG on Sunday, continuing Melbourne’s best start to a season in 27 years. 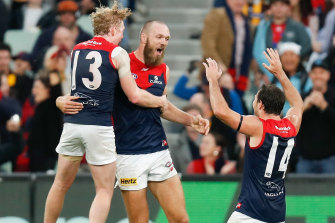 There was even more to like for the club earlier in the day, with key forwards Weideman (seven goals) and Brown (three goals) both impressing in Casey’s VFL win over Box Hill. After injury-interrupted pre-seasons, coach Simon Goodwin said both men are fit to play in the AFL next weekend, leaving the Dees with a selection conundrum given the strong showing of fellow tall target Tom McDonald and solid performances from Mitch Brown and Luke Jackson against Hawthorn.

Fritsch – another Melbourne forward – will also come under consideration according to Goodwin following surgery on a broken hand, while star defender May is in contention as well after a facial injury in round four.

Goodwin acknowledged the Dees’ match committee had been presented with a pleasant set of headaches. 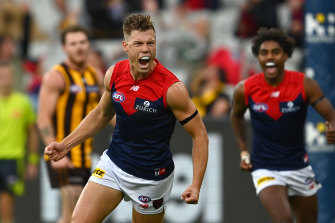 Jake Melksham of the Demons celebrates kicking a goal in round five. Credit:Getty Images

“I thought Tommy and Luke were brilliant today. Sam kicked seven and Ben kicked three and was very influential in the game as well. It’s just a fantastic problem to have. It’s one that we didn’t think we’d have at the start of the year, and through the period we went through at end of last season,” Goodwin said.

“We’ll continue to reward the players that are in the team and playing well … but we won’t be afraid to make change if needed.”

Goodwin left the door ajar for the Dees to play a stack of the key forwards in the same side.

“We’re really open-minded about the opportunity that may present for us. We were very tall in the VFL today and we functioned really well,” he said.

“There is potential to play an extra tall at some stage and have a look that. We’ll have to weigh that up.”

Goodwin said the Dees were “really hopeful” of May playing against the Tigers while Fritsch is a “possibility.”

Goodwin added that former skipper Nathan Jones was a guaranteed starter in what will be his 300th AFL game.

Hawks coach Alastair Clarkson pointed to a lack of experience in attack as an issue for the Hawks. Part of the reason for that dearth of seasoned players inside forward 50 is the retirement of Jonathon Patton on Friday. The former No. 1 draft pick called an end to his career as he struggles with the fallout from a series of lewd messages he sent to women.

Clarkson said he was comfortable with the manner in which the situation had been handled, adding that the Hawks would strongly consider filling Patton’s spot in the mid-season draft.

“It’s an enormously complex situation, and I think it’s been handled with real respect and dignity by all parties,” Clarkson said.

“I’m just pleased with his declaration that he wants to get on with his life, and also the acknowledgement that he’s made some mistakes in the past. He wants to move forward, that allows us now as a football club to actually use that spot on the list.”