De Belin could lose close to annual salary in court

Jack de Belin's fight to clear his name in court could cost him close to his annual $600,000 salary should it ultimately prove unsuccessful.

A Federal Court judge on Thursday declared de Belin free to play, for now, as the NRL had not yet tendered the necessary paperwork to properly enforce the new no-fault stand-down policy for players charged with serious offences. 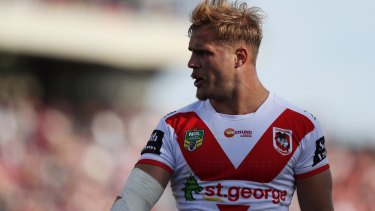 Left out: Jack de Belin is fighting to clear his name in court.Credit:NRL Photos

The NRL will officially submit the paperwork on Monday, with a decision to be made on the legitimacy of League Central's case at an interlocutory hearing next Thursday, the same day the NRL season kicks off.

Sources with knowledge of the de Belin case have told the Herald the 27-year-old will have racked up at least $100,000 in legal bills by that point.

The NSW Origin back-rower has engaged barrister Martin Einfeld, QC, who is understood to fetch a fee just shy of $10,000 per day.

His solicitor, Robert Tassell, is understood to carry a fee of about $4500 per day. 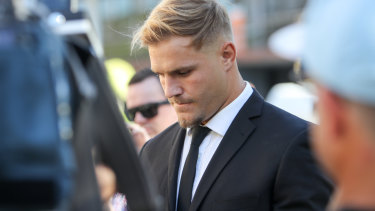 But that may only be the start of the real financial pain.

The full extent of that will come if de Belin and his legal team appeal and the case proceeds to a final hearing.

With another two full days of preparation and an additional day in court, one legal source said the $100,000 in costs would quickly hit the $300,000 mark.

If unsuccessful in the final hearing, de Belin would once again have to pay a large percentage of the NRL and ARLC costs, taking the total estimated bill to almost $500,000.

That is quite the price to pay, especially considering de Belin is footing the entire bill by himself.

The Herald has been told the Dragons were considering joining de Belin in taking legal action as late as last weekend but did not do so when the size of the potential bill was floated. 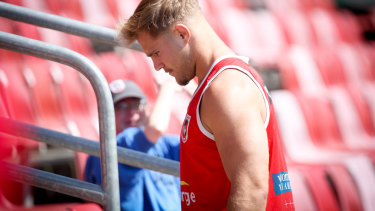 In strife: Jack de Belin has been stood down by the NRL.Credit:Adam McLean

The club continues to support de Belin and pay him his salary but aren't financially backing his Federal Court challenge.

Lawyers engaged by Dylan Walker and Tyrone May are also watching the case closely.

The pair have been stood down by NRL chief executive Todd Greenberg under his new discretionary powers as the charges carry a maximum prison term of 11 years or more.

Both de Belin and 21-year-old Callan Sinclair have pleaded not guilty to the aggravated sexual assault of a 19-year-old woman in Wollongong on December 9.

In documents filed in court on Thursday, de Belin argued the NRL and ARLC did not have the power to stand him down on February 28 and had “formed a view that de Belin was guilty” of the rape and had “engaged in conduct that warranted his immediate suspension as a player for the club”.

"The suspension representation was made in press releases, social media, on www.nrl.com, in television, radio and newspaper interviews by Peter Beattie and Todd Greenberg published in every state and territory of Australia,” the court documents read.

The Dragons star is seeking an order which would force the NRL and ARLC to immediately issue a press release and advertise in the Herald, The Age and other prominent publications that: “The NRL has not suspended St George Illawarra player Jack de Belin. He is available to play for St George Illawarra”.