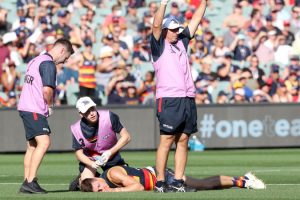 Geelong coach Chris Scott believes Patrick Dangerfield did his best to protect both himself and Jake Kelly in a brutal collision that left the Adelaide defender concussed and the Cats champion’s bid for a second Brownlow Medal hanging by a thread.

Dangerfield’s bump in the second quarter of Geelong’s 12-point loss to the Crows resulted in a nasty clash of heads which forced Kelly to be stretchered off Adelaide Oval. 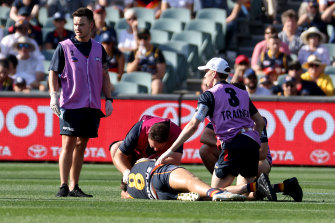 Adelaide’s Jake Kelly is attended after a heavy clash with Patrick Dangerfield.Credit:Getty Images

Dangerfield shrugged off the bloody incident and a slowish individual start to pilot the Cats’ ferocious but ultimately forlorn fightback from 43 points down in the third term.

But he faces an anxious wait with the incident likely to attract the attention of the MRO.

“My take was when you’ve got two players running full-speed at each other, and one player kicks the ball just before contact, then the player should do everything you can not to hurt the other player,” Scott said. 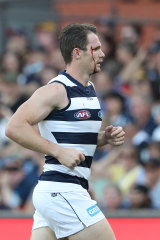 A bloodied Patrick Dangerfield comes off during the clash with Adelaide.Credit:Getty Images

“Don’t jump off the ground, don’t raise your arms, you can’t tackle him … sometimes players run into each other and there’s a head clash. I don’t think he intended to headbutt him, that’s for sure.

“To my eye, it looked like he [Dangerfield] was doing everything he could to protect himself and the other player.

“It’s a game we play – two guys running at that speed straight at each other. Collisions happen.″⁣

Scott also defended his decision to again play Dangerfield predominantly in the goalsquare, a tactic he employed – and copped some criticism for – in Geelong’s grand final defeat to Richmond last year.

“Because he’s a really good forward, because he can’t play the whole game on-ball, because he wants to play there and because we have a bit of information that other people don’t have that we choose not to disclose,” was Scott’s response.

“Richmond do it OK with Dustin Martin. You always get judged on the outcome. The prediction is hard, the retrospective opinions are easy.”