The 190-centimetre Glenelg product is without a deal for 2021 as the Lions deal with a list and salary cap crunch on the back of the new collective bargaining agreement unveiled late last week. 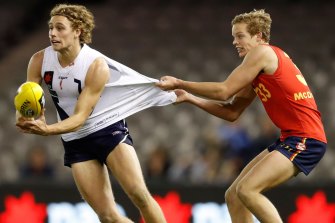 Mitch Hinge (right) tackles Will Brodie in their under-18 days.Credit:Adam Trafford

Alternatively they could force him into the pre-season draft where the Crows are already committed to taking fellow South Australian Jackson Hately after the midfielder was unable to reach a deal with Greater Western Sydney for the midfielder during the trade period earlier this month.

The AFL's list lodgment deadline is on Wednesday, with the delisted free agency window opening the following day.

Should he join the Crows, Hinge would become the third Lion to leave to another club this off-season following fellow backman Alex Witherden's trade to West Coast and veteran ruckman Stefan Martin's move to the Western Bulldogs.

The Lions brought in Joe Daniher from Essendon and a free agent and traded for Nakia Cockatoo from Geelong.

The Lions have several promising academy players available to them at next month's draft including Blake Coleman, the younger brother of Brisbane goalsneak Keidean Coleman.