Craig Bellamy tells Storm to bunker down for Tigers attack

For at least one week, Ryan Papenhuyzen will get the chance to audition as Melbourne Storm's starting full-back.

But coach Craig Bellamy has warned his young flyer and the rest of the Storm to be ready for a torrid affair when they host Wests Tigers at AAMI Park on Thursday night.

Papenhuyzen starred in his 32-minute stint during last Saturday's 64-10 thrashing of Parramatta scoring a try, setting up two others and making three line breaks with his speed coming to the fore. 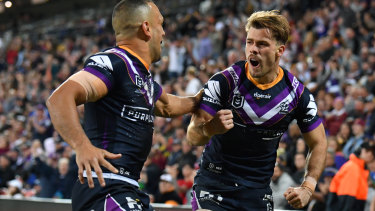 Bellamy said his speed compared to a young Billy Slater as does his slim build.

"He reminds me a bit of Billy early in his career," Bellamy said.

"Billy was a lot smaller then than when he finished his career and he was quick, so there's a couple of similar traits there."

Papenhuyzen is the Storm's third full-back with Scott Drinkwater playing in pre-season then tearing his pec muscle and Jahrome Hughes starring in the role before being heavily concussed in the second half of last week's game.

Hughes will likely only miss this game and Drinkwater is around two weeks from being available giving Papenhuyzen one game to shine.

"That half-an-hour that Paps played, you aren't going to see too many better full-back performances than that," Bellamy said.

"He's obviously excited, That's his [preferred] position, but one thing is that it's not going to happen like it did the other night.

"He will have to start again and he's aware of that."

The Storm left Patrick Kaufusi and Tino Fa'asuamaleaui out of their squad on Wednesday night, with utility forward Joe Stimson tipped to come onto the bench.

The Tigers beat the Storm twice last season, including Slater's 300th game, and they were in blazing form last round thumping Penrith Panthers 30-4.

While both attacks dominated last round, Bellamy thinks this game will be more closely contested.

"I know what happened last week ain't going to happen this week for us," Bellamy said.

"We have to start again. We had a lot of ball last week and a few bounces of the ball went our way. You make those things happen as well but not everything will go our way.

"There will be a few more tougher periods, we have to make sure we dig in and get the job done."

The Storm host Wests Tigers at AAMI Park on Thursday at 7.50pm.

COVID-19 and college football: Where each Power 5 conference stands on 2020 schedule

Clive Tyldesley ‘upset, annoyed and baffled’ at ITV decision to remove him as lead commentator

Paulo Dybala will become 'the face of Juventus and club captain'