Home » Rugby League » Could Carlton be closer to a flag than Hawthorn?

Could Carlton be closer to a flag than Hawthorn?

If there’s one thing we’ve learned about the Hawks over the past decade, it's that you can never write them off.

But the biggest questions I have about Hawthorn right now are: Where are they at? And what’s their future? With three wins and three losses after six rounds this season, they’ve been solid, but not convincing. 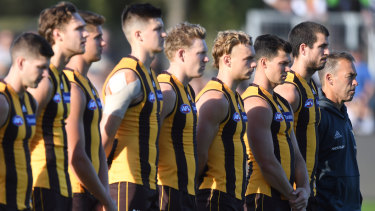 The Hawks beat Carlton last weekend, but could it be the Blues who are closer to a flag?Credit:AAP

They’re so well drilled and have enough experience on their list to ensure they’ll still cause most teams a few headaches on their day. But watching the Hawks against Carlton on the weekend, I couldn’t help wondering: is it the Blues who are closer to a premiership?

Even if they didn’t win the game, the Blues looked more dynamic and appear to have more upside. Some might argue, "so they should have", given how many high draft picks they had running around compared with the Hawks. But that’s where it gets interesting.

Hawthorn have gone down a very deliberate path in recent years, in a bid to stay relevant when it comes to September. They’ve traded for mature-aged players Tom Mitchell, Jaeger O’Meara, Chad Wingard and Tom Scully, among others.

While it’s hard to argue with their results, would the current group be good enough to win the premiership, even if Mitchell was fit? I don’t think so. It can be dangerous to hover around the 6-10 mark on the ladder for any period of time in terms of draft picks and your draw.

Because the Hawks finished in the top four last year, do they believe they deserve another crack at a flag with this group? Fourth spot probably flattered them and their straight-sets exit from September showed they were still some way off the best teams.

That’s not to downplay their achievement. It was never going to be easy for Alastair Clarkson and his list management team to break up their all-conquering premiership side without some sort of short-term pain. The coach made brave decisions to move on some elder statesmen and that has been vindicated.

Again, at the end of this year, the Hawks could lose more experience, whether it be Jarryd Roughead, Shaun Burgoyne, Grant Birchall or even James Frawley. Replacing that much experience quickly is tough to do.

Free agency has made it a little easier and the Hawks have proven they are a destination club.  They’ve already been linked to a number of star players, including GWS' Stephen Coniglio.

If that eventuated, add him to a midfield alongside a fit-again Mitchell and O’Meara and it’s a strong one. The likes of Jack Gunston, Isaac Smith, Ben Stratton, Liam Shiels and Luke Breust also maintain a strong core. Throw in Ben McEvoy, who is in career-best form, and they look strong in the middle. Still, there are plenty of holes, particularly when it comes to their key posts at either end, which is in stark contrast to their premiership sides.

While "Roughy" has found a bit of life up on a wing and on the ball, Tim O’Brien clearly has talent, but at 25 needs to be more consistent. At the other end, Frawley is serviceable but has also had injuries of late, while there are question marks over Kaiden Brand.

James Sicily is already a gun and probably one of their most important players, but you don’t want him being forced to take one of the opposition’s two best forwards. He’s better suited playing an intercept role, then launching counter-attacks.

So at some point, will the Hawks need to take a punt and go to the draft? Or will they continue to trade away their top selections and top up?

Because of the nature of the draft in spreading talent across the competition, it’s a crossroads moment Geelong and Sydney have also faced.

Along with Hawthorn they’ve been the three dominant teams of the past decade, but probably haven’t made the impact they would’ve liked in recent finals series.

The Cats identified their deficiencies, changed their game plan and used the trade and draft period accordingly. They’ve managed to stay around the mark through a mix of mature-age recruits like Tim Kelly and young talent with later picks. It also helps when you’ve still got Patrick Dangerfield, Tom Hawkins and a skipper like Joel Selwood.

The Swans on the other hand have now all but conceded they’re rebuilding. John Longmire has said in the past week fans can expect to see plenty of young players getting more experience. With their academy, the Swans have an advantage in that regard, but that’s a story for another time.

The Hawks, for their part, have bucked the trend of needing to "bottom out". But how long can they keep doing it?