Collingwood should take note of history as coach search begins 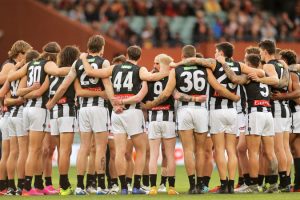 When Nathan Buckley and Collingwood declared Monday would be his final game as coach, Collingwood eyes, misty at the loss of a favourite son, turned immediately to a list of replacements.

The immediate assumption was that Collingwood, like any football club in need of a new coach, should first look to the list of available or gettable experienced coaches. 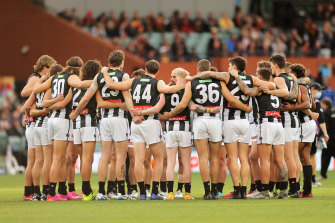 The Magpies are on the hunt for a new coach.Credit:Getty Images

History says that might not be wise. The odds favour an untried coach taking the club to its next premiership.

In the last 20 years, only two flags have been won by coaches at their second or third clubs – Leigh Matthews and Michael Malthouse.

Indeed, every flag in the last 17 years – except Malthouse’s at Collingwood – has been won by a coach who had not been a senior coach elsewhere before taking the job at the club they then coached to a flag.

Damien Hardwick and Alastair Clarkson had never been a senior coach anywhere before getting the Richmond and Hawthorn jobs and now have six flags between them. Adam Simpson, Luke Beveridge? Newbies.

Paul Roos has been at two clubs since Sydney but only at the Swans, his first club, did he win a flag.

John Longmire had sat next to Roos but not coached anywhere in his own right before taking over and winning the Swans a flag. Mark Thompson had premiership success as a coach only at Geelong, not Essendon; John Worsfold only coached the Eagles to a flag.

Chris Scott won it in his first year at the Cats. There is nothing more newbie than that.

Mark Williams, too, had been a long-serving assistant but had not held the top job anywhere before Port Adelaide.

We have seen Rodney Eade and Terry Wallace coach multiple clubs to finals without a premiership. It didn’t make them bad coaches, it just left them as coaches who didn’t win flags.

We have been conditioned to believe that inexperienced coaches are a risk, but the odds are now with a new coach being the person to take a club to its next flag, not someone who has done it before.

Naturally, this run of success for untried coaches does not mean an experienced coach at their second or third club would not be successful. But in the last 20 years they seldom have been, at least inasmuch as success is defined by premierships. Ross Lyon, for instance, took Fremantle from whipping boys to grand finalists.

This recent history should not provide a pointer to what Collingwood should do, but rather a warning of what they should not do and that is to assume that the first and best choice will be someone who has been there and done it before.

The priority should be to run a process, not to run for a name. Collingwood are a behemoth club and experience in the job with another team would only partly prepare you for what you would experience at the Pies.

There is also the raising of Alastair Clarkson’s name as a possible option to Collingwood to replace Nathan Buckley.

Clarkson is undeniably a great coach. He has an astonishing record. Presently his side sits second bottom.

As his premiership-winning predecessor at Hawthorn, Allan Jeans, once said: “I’m yet to see a coach win a premiership with a poor side”.

This is true and acknowledges coaching is only part of the bigger equation. Neither Collingwood, nor any club, can hope a coach will be the panacea.