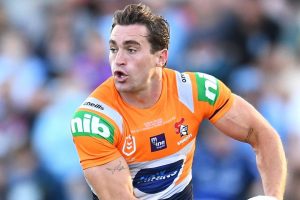 The 25-year-old’s future had come into focus in recent weeks, as he was heavily linked with a move to the Sydney Roosters.

The race to the 2021 NRL Telstra Finals Series is on and every game matters. Watch Live & Ad-Break Free on Kayo. New to Kayo? Try 14-days free >

Watson eventually inked a two-year deal to play with Trent Robinson’s side from 2022 onwards, but O’Brien revealed just how difficult the decision had become for Watson in recent weeks.

“One of the mornings last week I could see how much this was weighing him down,” O’Brien said.

“I remember giving him a hug, it was like hugging a corpse.

“I care about him, he’s a good person. He’s a good human being, he’s a credit to his family.

“It’s a hard decision but we only get one life, and I’m proud of him in a way, too.”

Watson’s return to the Roosters represents a new birth at the club where he made his NRL debut. The utility star made 38 appearances across the 2016 and 2017 seasons before making the switch to the Hunter Region with the Knights.

O’Brien was in the dark as to exactly which way Watson would go in terms of leaving or staying, but he takes some solace in not losing Watson to a club he had no connection with.

“I really wasn’t sure. I knew there was positives both ways,” O’Brien said.

If you're going to lose a player back to the club that debuted him … probably makes it a little bit easier to take.

“It could have gone either way, I think both Robbo (Trent Robinson) and myself want to play him in very similar roles.

“I don’t want to lose any of them, but that’s footy. You can’t keep them all.

“We’ve lost a pretty important one today but as I said before we haven’t lost him yet.

“We get to cherish every single day.”

Watson’s exit prompted whispers regarding a rift between the player and O’Brien, as well as the Knights’ top brass, as the 25-year-old reportedly took a pay cut to join the Roosters.

Connor Watson crashes over for a try against the Cowboys. Picture: Ashley Feder / Getty ImagesSource:Getty Images

But O’Brien moved quickly to shoot down any rumours surrounding a breakdown in relationships.

“I get it – when you don’t sign someone like Connor and miss out on him, there’s going to be some opinion and speculation.

“But I can honestly say there’s no truth to that.

“We’re a tight playing group, we’re really honest with each other, but it’s not going to derail us.

“We’re in a position where we can do something with our season and I’m not going to let something like this derail this group.

“There’s more good times for us to be had together.”

If the Knights’ remaining fixtures are anything to go by, then those good times O’Brien mentioned will almost certainly happen.

Sitting in seventh on the ladder, Newcastle take on the last-placed Bulldogs on Saturday, before a tasty clash against the finals-chasing Titans next Thursday.

O’Brien’s side will face the Broncos in the last game of the season, and hopefully by then for Knights fans, the team will be locked in for another season of finals footy and the chance for Watson to finish his tenure with the Knights on a high.