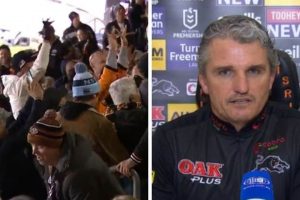 Ivan Cleary was public enemy No. 1 at Leichhardt Oval and didn’t the locals let him know it.

Wests Tigers handed a depleted Panthers outfit their first loss of the year as they went down 26-6 on Friday night after taking to the field without a stack of Origin stars who are in camp preparing for Game 1 on Wednesday night.

As the clock wound down Tigers fans started giving it to the opposition coach, chants of “Cleary’s a w***er” reverberating around the suburban ground.

Supporters in the eastern grandstand turned around and gave Cleary a gobful as he sat in the coach’s box and took his medicine, while some even blew him kisses.

Cleary coached the Tigers in 2017-2018 where he urged players to either get on the “bus” or find somewhere else to play. Ironically, he left his own contract early after receiving a better offer to coach his son Nathan at Penrith — the club that sacked him in 2015.

Last year when the Panthers beat the Tigers, Cleary mocked angry Wests fans by blowing them kisses but this time the tables were turned.

However, the 50-year-old was keen to downplay being on the receiving end of any trash talk when asked if Tigers supporters went “too far” on Friday night.

“I didn’t notice it,” he said, prompting some giggles from reporters at the press conference who clearly weren’t buying that response.

The crowd absolutely gave it to Ivan Cleary.Source:FOX SPORTS

Tigers back to winning ways at spiritual home

Leichhardt loyalists have endured some awful afternoons on the hill in recent years as they’ve watched their side botch all the big games, but the boos were replaced by boisterous bravos on Friday.

Two months after they were taunted by their fans after an embarrassing effort against the Cowboys, the Tigers claimed their best win in years in front of a heaving crowd that couldn’t have been any prouder.

“The boys definitely spoke about it,” Tigers coach Michael Maguire said of his side’s lean record at Leichhardt.

“We’re aware about it and it hurts, but it was nice to see the fans here enjoy the game.”

Much-maligned halfback Luke Brooks was brilliant from the outset, repeatedly putting Luke Garner in space with nifty footwork before he came up with a textbook try-saver to deny Dylan Edwards.

But it was the aggression he showed in the next set that typified the Tigers’ hard-edged approach as he fearlessly took it to the world’s best prop after James Fisher-Harris tackled him as he kicked.

“It was probably a month ago where I spoke of the barrage that he does cop, but it’ll be nice to see the compliments that he’ll be getting now. That’s part of being a halfback in most teams, but he’s really worked hard on his game.”

The Tigers were far from perfect as they conceded 11 penalties and six restarts, but the fans’ frustrations later turned to joy when the hosts were awarded a penalty try with 16 minutes to go after Luciano Leilua was hit high by Robert Jennings.

“I’ve got no views. Not one that I want to share anyway,” Cleary said.

Cleary had no comeback to Tigers fans.Source:Supplied