Home » Rugby League » Class on and off the field, Roughead makes case for AFL return

Class on and off the field, Roughead makes case for AFL return

Hawthorn hero Jarryd Roughead made a strong case for a return to the Hawks' AFL side with a five-goal performance for Box Hill in the VFL and enhanced his off-field reputation as he passed on some tips to his Footscray opponent.

Roughead, a four-time premiership player and 281-game veteran at the Hawks, was obviously going to be the centre of attention in Sunday's MCG curtain raiser after the 32-year-old was dropped to reserves by Hawthorn coach Alistair Clarkson this week. 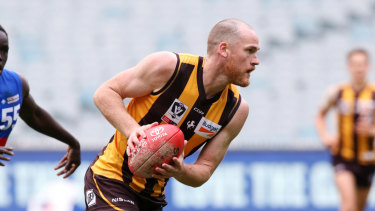 Jarryd Roughead kicked five goals and had seven marks for Box Hill against Footscray in the VFL. Credit:AAP

The forward not only played a major part in the thrilling draw – with both sides tied at 12.12 (84) – he was also captured in conversation during the match with Footscray defender Reuben William, appearing to be helping out with some impromptu in-game coaching. 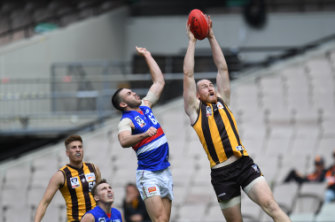 Jarryd Roughead takes one of his seven marks for Box Hill against Footscray. Credit:AAP

Roughead's former teammate Campbell Brown teased him on TV about the gesture.‘‘He probably is (giving advice), knowing the guy, but I can’t believe that,’’ Brown said on Channel Seven.‘‘If that was me, I’d be telling my direct opponent to run in all the wrong positions. I’d be giving him a lot of things to do that you should not.

Roughead kicked five goals, one behind, took seven marks and made three tackles in an impressive outing.

In a post-match interview with Channel Seven, he deflected attention away from his individual effort and statistics, instead expressing disappointment that his side was not able to win the match after staging a spirited third-quarter comeback.

"It would have been nice to get the win," he said. "I haven't played with any of these boys really, so I have to fit into their system, rather than them fitting in with me, so the fact I was able to was a positive.

"They won the premiership last year so it is not as if they are an inexperienced side that doesn't know how to win. There are a lot of teenagers with a lot of them born in the 1990s and even 2000s."

Roughead did manage to give himself some credit, even if it was light-hearted, joking; "No one else has kicked five goals at the MCG this weekend."