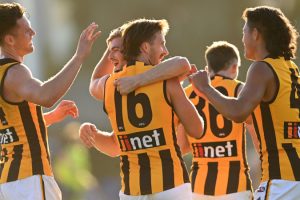 The Hawks had only one of those penalties assessed against them in Saturday’s win over North Melbourne, with Dan Howe caught out of place in the first term and the 50-metre penalty resulting in a goal to the Kangaroos. 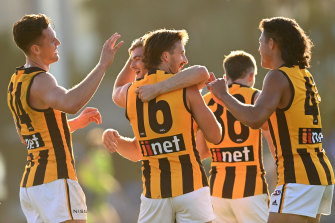 Clarkson said he was impressed with how players and umpires were handling the rule but he was less complimentary about the cap of 75 interchanges per game.

“The players have adjusted really well to what the new rule is and that’s reflected by the fact there is not a lot of 50-metre penalties applied,” Clarkson said.

“Similarly, the umpires have adjusted well to not being so nit-picky on every little movement. It’s very difficult for the umps to judge the protected area and who is going into it, the player with the ball and the man on the mark. 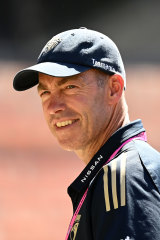 Alastair Clarkson looks on during the clash between Hawthorn and North Melbourne at Arden Street.Credit:Getty Images

“It’s a lot to take in for an umpire and I reckon they are doing it really well at the present time.

“The players have adjusted really well and we’ve done a fair bit of work on it but there is nothing like real games to practice it 18 versus 18.”

Clarkson said teams would be closely monitoring the physical impact of the interchange rule on their players as the weeks went on.

“We do know it has increased scoring because there is a little more flow in the game but with 75 rotations the game fizzed a bit in the second half,” Clarkson said.

“That might be a little to do with it being a pre-season game and players will get better match conditions as the year goes on but in the three games so far the intensity in the game falls away a little bit late in the game.

“Some of that has to do with the running and what the players need to do, we will monitor that and see how it goes over the early part of the season.”

Kangaroos coach David Noble said he felt the rules could help his young side once the players ‘matured’ into their style of game.

“I wasn’t a fan early but having watched the games over the weekend it seems speed is the call and that will probably suit us as we mature in our game style throughout the year,” Noble said.

“We have to make the best that we can of it. We will try to pick it apart as coaches, if it helps scoring then that’s good [for] us as I want to score.”